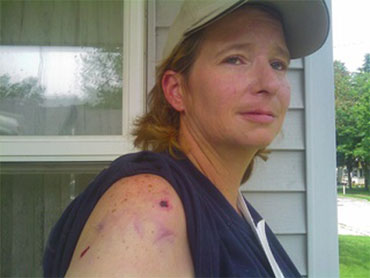 Uninsured and too broke to pay for medical care to treat her painful shoulder injury, a Niles, Mich., woman shot herself in the same shoulder and went to the E.R. in hopes of obtaining free medical care.

By law, hospitals must treat emergency patients even if they don't have insurance.

Kathy Myers' troubles started when her 80-lb Golden Lab yanked on his leash during a skirmish with her Chihuahuas. The big dog yanked Myer's shoulder as well, injuring her rotator cuff.

After a month of agonizing pain, the unemployed 41-year-old used her in-laws' gun to take matters into her own hands. She placed icepacks and pillows around her head and neck, and then pulled the trigger, according to Wood TV 8 in Grand Rapids, Michigan.

Myers says she made a rational choice: she had hoped that the doctors who mended her flesh wound would also fix her rotator cuff.

But her plan didn't work out quite the way she had hoped. Last Thursday doctors treated the bullet wound, but instead of fixing her injured shoulder, they gave her some antiinflammatory drugs and sent her home.

Though shooting yourself to get medical care may seem a bit extreme, Myers told reporters at WSBT-TV in South Bend, Ind., that she has no "suicide wish" and that she "wants to live" despite her problems.

And her problems may only be increasing. Besides being in even greater pain, Myers might have to go before a judge to face a charge of firing a weapon within city limits.

Myers, who recently lost her job with an Indiana hazardous-waste removal company, is one of 1.2 million Michigan residents without health insurance.