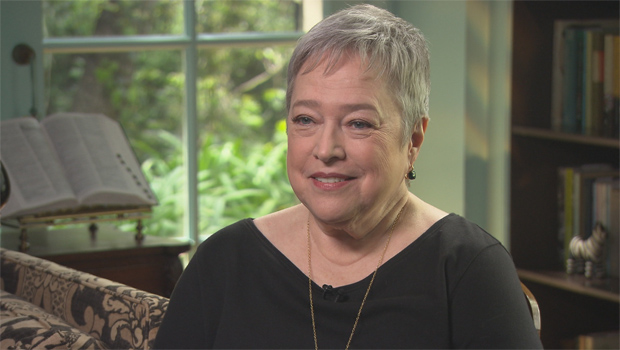 Kathy Bates played a woman charting her own course in the 1991 film "Fried Green Tomatoes." Now, in real life, she is still doing things her way, only for much higher stakes. Lee Cowan has a Sunday Profile:

When Academy Award-winner Kathy Bates asked us to come to her doctor's appointment recently, we weren't sure what to expect. After all, why would anyone want cameras in an exam room, especially an acclaimed Hollywood actress?

But this is something Bates wants people to see -- modesty be damned.

But after surviving both ovarian cancer and breast cancer Kathy Bates found herself in yet another battle -- one that needed all the strength of her characters, combined.

"You probably noticed, I'm wearing what we call a compression sleeve," she showed Cowan. "It's elastic, and it keeps the arm, maintains its size."

Her left arm, and to a lesser extent her right, are swollen with fluid, a chronic condition called Lymphedema. "Yeah, that's painful," she commented.

It first reared its head after doctors removed 22 lymph nodes as part of her double mastectomy four years ago.

"I went berserk, I went nuts," Bates said. "And for a long time after that, I was really, really angry. 'Cause I thought, 'Great. Now I gotta deal with this."

Lymph nodes process fluid and carry it around the body. Without the lymph nodes, the fluid backs up, causing the swelling.

The condition requires daily management, and frequent visits to a Lymphedema specialist, who manually coaxes the fluid back into Bates' system through massage or a special pressure cuff.

Lymphedema by itself is not fatal, but it can be terribly disfiguring and debilitating. And it's hardly rare. As many as 10 million people suffer from it in the U.S. alone.

That is more, Bates noted, than who suffer from a host of diseases: "More than MS, Muscular Dystrophy, ALS, Parkinson's and AIDS, combined."

It didn't help that when Bates was diagnosed, she was going through a professional rough patch. She had just gotten the news that NBC was taking her show, "Harry's Law," off the air.

"One of the main reasons that our show was cancelled was because our audience was too old," she laughed. "Then you think, okay, that means maybe I'M too old. And then you have a double mastectomy, and so it's was like, 'Okay, it's over, everything's over.'"

But then came FX's "American Horror Story," where Bates not only shined, she found her footing again.

"The work on that show has just rejuvenated my life, my energy, my outlook. I feel like I have something to look forward to," she said.

She even got to the point that she started joking about her mastectomy, like when they were trying to shoot an artsy shot underneath her arm.

Born in Memphis, Tennessee, acting was in Bates' blood (at least according to her mother) as far back as the delivery room.

"She said that when the doctor smacked me on my behind, that I thought it was applause, and I've been looking for it ever since!" Bates laughed. "And I have to say I think she's right. I'm just such a ham!"

There were doubters along the way -- those who said she wasn't "conventionally attractive" enough to be a real actress: "You know, 'Your upper arms are too heavy, and you really have a more maternal look about you, and you know I really don't think you're going to make it much in your early years. It's going to be later when you get older.' And I thought ... can't say that on TV!"

"Did that hurt your feelings?" Cowan asked.

"Yeah, yeah, that hurt my feelings a lot," she said. "But it all kind of turned out to be right."

Indeed, it did. The role that put her on the map, playing the deranged Annie Wilkes in "Misery," didn't come along until Bates was 42.

By Hollywood standards, that was "over the hill!" Bates laughed.

"But that was vindication, I guess, for you, right?"

Her performance won her a Golden Globe and an Oscar. She was a star, and one night walking down a street with fellow actor Alec Baldwin, it all hit.

She signed plenty of autographs. But later that night, while taking her dog for a walk, something happened: "I realize, 'Oh my God, I don't have anything to clean up after him with.' And right away, my head just goes, 'It's going to be in the tabloids!' And finally I find this piece of paper on the ground and I pick it up, and it had my autograph on it! That was a message from heaven! Yeah. 'Settle down.'"

That lesson in humility has never left her. Maybe that's how she could so easily share a hot tub with Jack Nicholson, in "About Schmidt" -- that and a little liquid courage. "I had a couple of Cosmopolitans before I got in there," she laughed.

Brave, on screen and off. But there is no script for Lymphedema, which makes this perhaps her bravest role of all.

Bates recently become the spokeswoman for the Lymphatic Education & Research Network, showing others like her that life can go on.

"We encourage them to come out of the closet, so to speak, to share their stories, and hopefully find some comfort in realizing that they are not alone," she said in a speech.

Like the unsinkable Molly Brown aboard the "Titanic," Kathy Bates isn't about to go down without a fight -- no matter how public her private struggle becomes.

"Have you taken on more than you were expecting you were going to take on?" Cowan asked.

"I didn't know what I was saying yes to," she said, "and the more I learn about it, the more angry I am. I feel I have to do something about it. And if I can use my celebrity for something real, then that's what I want to do."