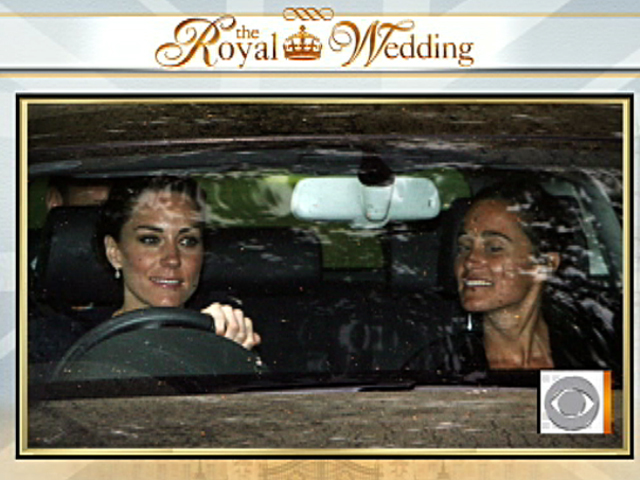 It's been a busy week for those involved in Friday's big wedding. But it looks like Kate Middleton is taking a rare moment out to be with her family one last time before she's a married woman.

"(Kate) was looking relaxed. Great to see," Arbiter said. "Pippa and Kate were down in Bucklebury, where they spent time with their family. They went to Newbury for facials, and William rolled into Bucklebury yesterday. I think, for all of them, it's nice to escape London and have a little bit of a respite, some country air before the madness of the next couple of days. Also, it's going to be the last time they'll spend quality time with Kate's family for awhile; they'll have the wedding, a two-week honeymoon, and they'll be expected to be back to Angelsey for William to be back at work. So it was a nice chance to have quality time all together."

In addition to new photos, fresh video of Prince William has been released -- of him in the Royal Navy in 2008.

"It was fantastic video of William," Arbiter said. "As the future head of the armed forces, he's had the opportunity to spend time with the Household Cavalry; he's currently serving with the Royal Air Force. This was his time with the Royal Navy back in 2008. ... He loves his work, he loves the adventure that it brings, and really loves learning about what everyone does and, clearly, so much so that he invited one of his colleagues from the Royal Navy ... to stand at the door of Westminster Abbey, along with two other members of the armed forces to greet them when they leave the abbey on the day."

Prince Harry is also in the news, Hill pointed out, because he's said to wants to take his brother out the night before the wedding.

Hill asked Arbiter if she thinks Charles might have said something like, "Listen, I don't want you bleary-eyed at the wedding. Let's take it easy."

Arbiter said, "We have heard Harry's mentioned taking William out on that night. There's also talk Charles is going to have to join at a dinner ... (that is being) hosted for the European royals. It's got a little eggy. Because Charles, as the future King of England, is technically supposed to be at that dinner -- it would be polite, but at the same time, I think, he wants to spend the last night with his boys, so it's one of the opportunities where he may choose family over duty. But Harry's going to make sure William has some fun first."

In other news about the wedding preparations, Arbiter said she saw flowers and the trees being loaded into Westminster Abbey Tuesday night.

"It was thrilling to see it going on," she said. "It is going to be a quintessential English garden. We saw eight 20-foot trees going in, azaleas, lilacs, blossoms -- it's just going to be breathtaking, and all of it has come from the royal estate.

The The floral arrangements near Arbiter as she spoke and as the segment ended were inspired by the royal wedding and provided by Amanda Austin Flowers.