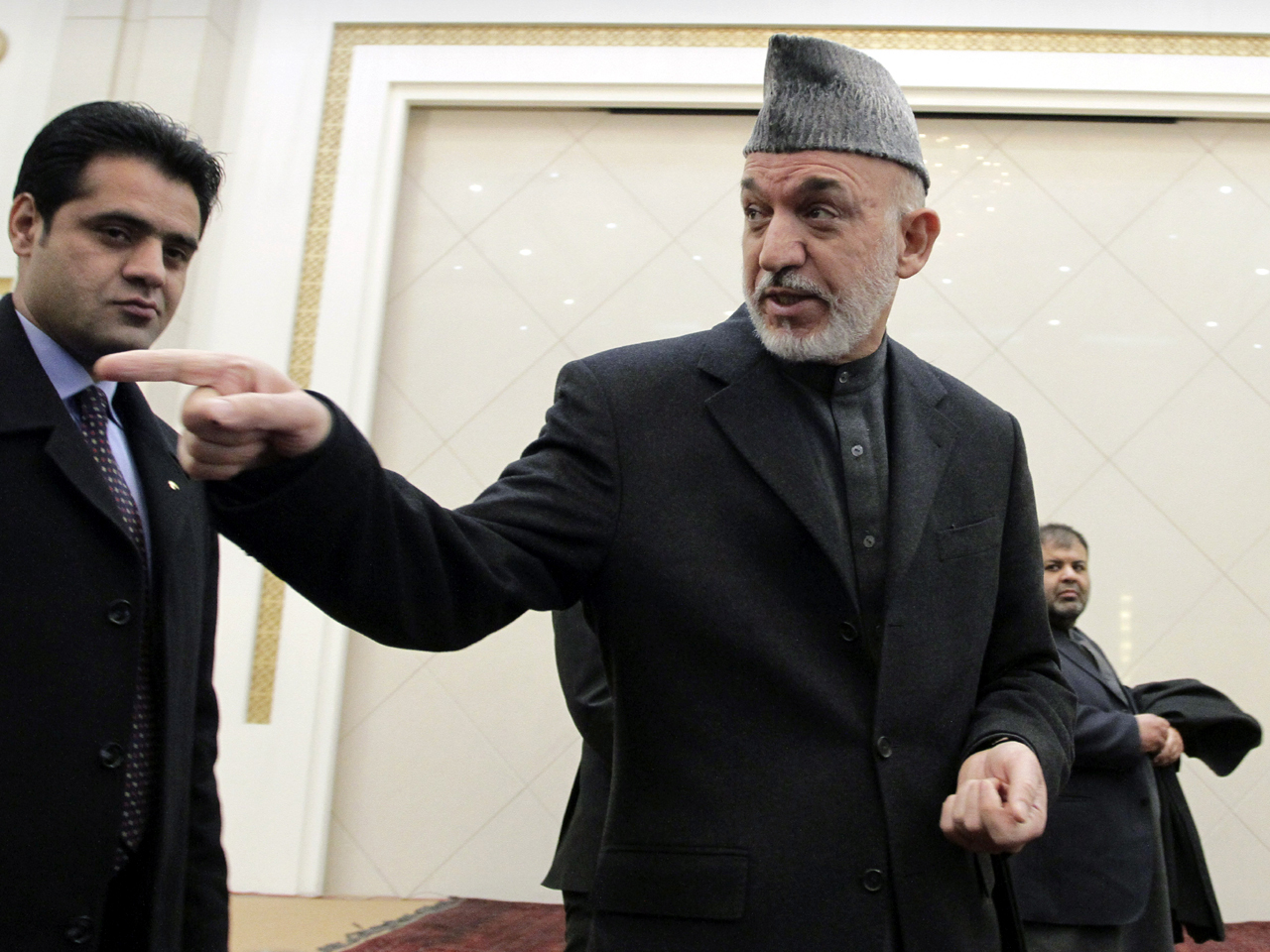 (CBS/AP) KABUL, Afghanistan - The U.S. campaign in Afghanistan suffered a double blow Thursday when the Taliban broke off peace talks and President Hamid Karzai demanded NATO troops immediately pull out of rural areas because of anger over a U.S. soldier's alleged killings of 16 civilians.

The setbacks effectively paralyze the two main tracks for ending the 10-year-old war. Part of that exit strategy is to gradually transfer authority to Afghan forces while another tack is to pull the Taliban into some sort of political discussions with the Afghan government.

Karzai also said he now wants Afghan forces take the lead for countrywide security in 2013, a year ahead of schedule. He spoke as Afghan lawmakers were expressing outrage that the U.S. flew the soldier suspected in civilian killings to Kuwait Wednesday night when they were demanding he be tried in the country.

"Afghan security forces have the ability to keep the security in rural areas and in villages on their own," Karzai said in a statement after meeting visiting U.S. Defense Secretary Leon Panetta. He said he had conveyed his demand to Panetta during their meeting.

Foreign Ministry spokesman Janan Mosazai confirmed that Karzai was asking for NATO to immediately pull back from villages and rural areas to main bases.

The soldier, who has not been named, is accused of going on a shooting rampage in villages near his base in southern Afghanistan on Sunday, killing nine children and seven other civilians, and then burning some of their bodies.

Karzai told Panetta that the weekend shootings in southern Afghanistan were cruel and that everything must be done to prevent any such incidents in the future. He said that was the reason he was demanding the pullout from rural areas now and early transfer of security.

Afghans fume over transfer of accused U.S. gunman
Panetta: Reevaluate how stressed troops are
Calculating the price of a civilian life in Afghanistan

President Barack Obama and British Prime Minister David Cameron said in Washington on Wednesday that they and their NATO allies were committed to shifting to a support role in Afghanistan in 2013.

Mr. Obama gave his fullest endorsement yet for the mission shift, but he said the overall plan to gradually withdraw forces and hand over security in Afghanistan will stand.

A Gallup poll released Thursday found that half of Americans favored a quicker withdrawal, with just about a quarter supporting the current timetable.

In January, after French President Nicolas Sarkozy suggested that foreign forces speed up their timetable for handing combat operations to Afghan forces in 2013, Karzai said he would be in favor of that — if it were achievable.

The call for an immediate exit from rural areas is a new demand however, and it is unclear how it will affect the transition strategy and ongoing talks with the U.S. about how to manage a long-term U.S. military presence in the country.

Panetta's trip to Afghanistan was the first high-level visit since the shooting incident. During his meeting with Karzai, he acknowledged that the U.S. had made a series of mistakes, including the shooting, the Koran burning and a video uncovered earlier this year showing Marines apparently urinating on dead militants.

Karzai is known for making dramatic demands then backing off under U.S. pressure. Even if he eventually changes his tone, the call for a pullback will likely become another issue of contention between the Afghans and their international allies at a time of growing war weariness in the United States and other countries of the international coalition.

The Taliban said they were calling off talks with the United States because the U.S. kept changing the terms of negotiations.

Taliban spokesman Zabiullah Mujahid said the insurgent group wanted to limit talks to prisoner exchanges and the establishment of a political office in Qatar, but U.S. negotiators wanted to broaden the discussion.

The Taliban said U.S. officials have recently made new demands in the talks, but did not specify what they were.

"Because of these American changes, the Taliban was obliged to stop the talks," Mujahid said.

Panetta applauded Karzai last month for telling an interviewer that the U.S., Afghan government and the Taliban recently held three-way talks aimed at moving toward a political settlement of the war.

The Taliban denied the claim at the time.

Afghan officials told The Associated Press that the U.S. had agreed in January to include representatives of the Karzai government in future meetings, but U.S. officials would not confirm that. U.S. officials did say that if this initial trust-building phase of contacts with the Taliban blossoms into full peace negotiations, the U.S. would sit alongside the Taliban and the Afghan government.