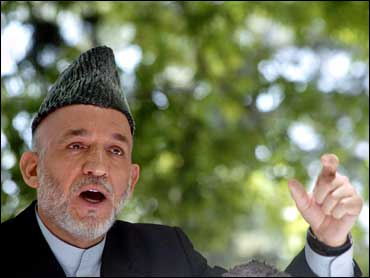 Afghanistan's president on Sunday called the Taliban's fugitive leader a coward, saying Mullah Omar should come out of hiding and face justice.

Afghan President Hamid Karzai's comments come amid claims, allegedly made by Omar in an audio tape aired Sunday by a Pakistani television station, that the U.S.-led coalition and the Afghan government lack the wisdom to solve Afghanistan's escalating violence.

Karzai did not comment on the tape's authenticity. But he told CNN's Late Edition television program that if Omar is "really in charge" he should come out of hiding and "face the danger that he is causing to hundreds of young people in Afghanistan and Pakistan."

"It needs guts to do what he's talking about, and he doesn't have it," he said.

Afghanistan is experiencing the deadliest campaign of militant violence since the Taliban's ouster in 2001. In response, U.S.-led forces have launched a huge anti-Taliban offensive — Operation Mountain Thrust — across southern Afghanistan.

Omar led the Taliban in the capture of Kabul in 1996. Following the Sept. 11, 2001, attacks in the United States, an American-led military campaign invaded Afghanistan and toppled the Taliban for harboring al Qaeda leader Osama bin Laden and his terrorist group.

Omar and the Taliban, Karzai said, do not represent a threat to Afghanistan's government.

"They exist in the form of attacking schools, attacking children, killing innocent people," he said. "They are no match for our power."

"They don't dare come to Afghanistan," he said.

He would not indicate where he thought they were, but said Afghanistan was making progress in its search for the terrorist leaders.

"We are looking for them constantly," he said. "There is no way that they can hide forever."

The three are believed to be hiding in the rugged Afghan-Pakistan frontier region.