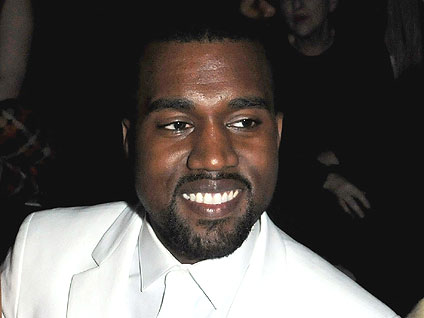 The noted rapper-producer is the newest celebrity to launch an account on the microblogging service. Since joining on Wednesday, the 33-year-old already has more than 218,000 followers and that number is steadily rising.

The "Love Lockdown" star has already disseminated new information on his upcoming projects via the service. West tweeted that his upcoming fifth studio album is no longer called "Good A--Job" and that he's "bouncing a couple titles around now."

West is already posting Twitter photos of his private jets, classical style inspirations (such as gold-rimmed goblets) and a digital reproduction of the 1812 Richard Westfall painting "Sword of Damocles" where he tweeted: "This what I'm on."

The social networking site is the first stop of many for the rapper as he preps the release of his forthcoming album, his follow-up to "808s & Heartbreak" in 2008.

On Tuesday, West dropped by the offices of Facebook, in Palo Alto, Calif., to preview some of his new material. The Associated Press reports that his as-of-yet untitled album is expected to be released Sept. 14.

As of Thursday morning, he currently "follows" no one.