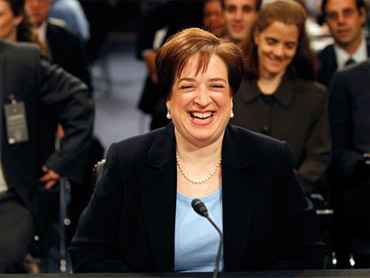 Supreme Court nominee Elena Kagan, who has displayed a cool demeanor and a sense of humor during her Senate Judiciary Committee hearing, is back on the hot seat Wednesday taking questions from senators as she moves closer to succeeding Justice John Paul Stevens, barring a major gaffe.

Republicans who oppose her nomination will need to resort to a filibuster to block a confirmation vote, a prospect that seems less and less likely.

A few uncomfortable exchanges with Republican senators about her treatment of the military and her political views didn't slow down Kagan during Tuesday's hearing. She tried to assure conservatives that her work as a Clinton White House aide and as President Barack Obama's solicitor general wouldn't make her a partisan justice.

"I know what happened at Harvard. I know you were an outspoken leader against the military policy," said Sessions, the committee's top Republican. "I know you acted without legal authority to reverse Harvard's policy and deny those military equal access to campus until you were threatened by the United States government of loss of federal funds."

Kagan said she was trying to balance Harvard's nondiscrimination policy, which she believed "don't ask, don't tell" violated, with a federal law that required schools to give military recruiters equal access as a condition of eligibility for federal funds.

"We were trying to make sure that military recruiters had full and complete access to our students, but we were also trying to protect our own antidiscrimination policy and to protect the students whom it is ... supposed to protect, which in this case were our gay and lesbian students," she said.

Republicans were also frustrated by her refusal to answer questions on specific legal issues or her political views, despite her having once denounced Supreme Court nominees for dodging questions.

"You are dancing a bit - maybe you should be on 'Dancing with the Stars,"' said Sen. Tom Coburn, R-Okla. Later, he pressed her on how she would take off her "political hat."

"That hat has not been on for many years," Kagan shot back.

She did call recent Supreme Court rulings upholding gun rights "binding precedent." She said the court's rulings require that in any law regulating abortion "the woman's life and the woman's health have to be protected." She said a 5-4 decision this year that corporations and unions were free to spend their own money on political activity was "settled law."

A master of the deadpan quip, Kagan used humor to disarm some senators.

She told the notoriously cranky Sen. Arlen Specter, D-Pa., that allowing television in the Supreme Court - something Specter objects to - would mean "I'd have to get my hair done more often."

That got a smile. "You have shown a really admirable sense of humor, and I think that is really important," Specter said.

Kagan later endorsed a friend for a federal judgeship and maybe even a Supreme Court slot someday - despite the fact that Democrats filibustered his nomination to the federal bench by President George W. Bush.

Sen. Lindsey Graham, R-S.C., called Miguel Estrada's not being a judge "one of the great tragedies for the country" and asked Kagan whether Estrada was qualified.

That answer clearly surprised Graham, who asked Kagan to put it in writing. She agreed.

"Well, your stock really went up with me," Graham said.