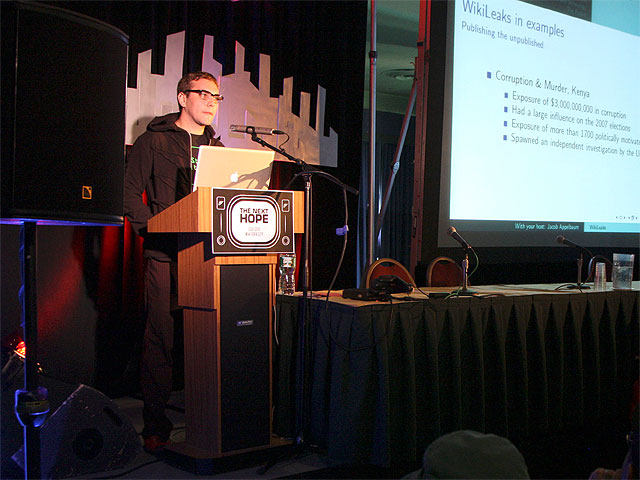 The U.S. Department of Justice has expanded its investigation of WikiLeaks-related accounts to encompass Google and Internet provider Sonic.net.

Both companies received secret court orders directing them to turn over information from the e-mail account of Jacob Appelbaum, a hacker and human rights activist who has been affiliated with WikiLeaks, the Wall Street Journal reported this evening.

CNET has learned that the secret court order is what's called a 2703(d) order. It's not as privacy-protective as a traditional search warrant, and some courts have ruled that such orders are unconstitutional when used to read a suspect's e-mail. Appelbaum has not been charged with a crime.

"We don't talk about individual cases to help protect all our users," Christine Chen, a spokeswoman for Google, told CNET. "Obviously, we follow the law like any other company. When we receive a subpoena or court order, we check to see if it meets both the letter and the spirit of the law before complying. And if it doesn't, we can object or ask that the request is narrowed."

Sonic.net CEO Dane Jasper told CNET this evening that "we did manage to unseal the specific order in order to provide it to Appelbaum." Jasper said, however, he could not provide additional details "as the case remains under seal." (Sonic.net is an Internet service provider in Santa Rosa, Calif., an hour or so north of San Francisco, which offers home and business connectivity.)

In March, a federal magistrate judge in Virginia dismissed constitutional questions and sided with the Justice Department when granting prosecutors access to WikiLeaks-related Twitter accounts, including details about what Internet and e-mail addresses are associated with them. An appeal has been filed.

Ever since appearing at The Next HOPE hacker conference in July 2010 on behalf of WikiLeaks' Assange, who's currently out on bail in England while fighting extradition charges, Appelbaum has been the subject of strict police scrutiny. The Tor Project programmer has been repeatedly targeted when he crosses the border, with his electronics seized, and he no longer travels with any sensitive data. Even his friends have had their laptops and cell phones temporarily seized.

The Justice Department's probe of WikiLeaks involves a grand jury in Alexandria, Va. It's unclear what charges may eventually be filed, and who would be targeted, but a lawyer for Assange said last year that he believes his client could be indicted under the Espionage Act for publishing over 250,000 classified State Department cables. (See CNET's analysis of how the Espionage Act might, or might not, apply.)

In this case, it appears that the Justice Department is not asking for the contents of Appelbaum's communications--instead, they want to know the identities of his correspondents, which can be even more useful. According to the Journal:

Sonic said it fought the government's order and lost, and was forced to turn over information. Challenging the order was "rather expensive, but we felt it was the right thing to do," said Sonic's chief executive, Dane Jasper. The government's request included the e-mail addresses of people Mr. Appelbaum corresponded with the past two years, but not the full e-mails...

The secret Google order is dated Jan. 4 and directs the search giant to hand over the IP address from which Mr. Appelbaum logged into his gmail.com account and the email and IP addresses of the users with whom he communicated dating back to Nov. 1, 2009. It isn't clear whether Google fought the order or turned over documents.

The secret Sonic order is dated April 15 and directs Sonic to turn over the same type of information from Mr. Appelbaum's email account dating back to Nov. 1, 2009.

On Aug. 31, the court agreed to lift the seal on the Sonic order to provide Mr. Appelbaum a copy of it. Sonic Chief Executive Mr. Jasper said the company also sought to unseal the rest of its legal filings but that request "came back virtually entirely denied."

Sonic.net said in a blog post in August that it retains logs of which customer was assigned which Internet Protocol address "for just two weeks; we don't need them beyond that period, so they are deleted." That's more privacy-protective than the industry norm.