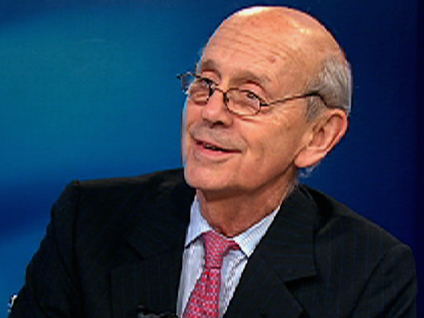 In 17 years on the Supreme Court Justice Stephen Breyer served on his share of controversial cases. He said that when the High Court decides an issue and Americans accept it, that says a lot about the country.

Breyer said the reason Americans don't riot in the face of unpopular decisions is a matter of history.

"It's a very good question: Why should Americans in a democracy do what nine unelected judges [say]?" Breyer said on CBS' "The Early Show." "It's worse than that: These nine unelected people can do thing that affect their lives and they can be very unpopular. They are supposed to be unpopular some of the time, because the Constitution gives rights to people who are unpopular the same as people who are popular ... and they might be wrong!"

"Go back 150 years and you'll see people didn't follow it when the Supreme Court said northern Georgia belongs to the Cherokee Indians. The President of the United States sent troops to evict the Indians.

"Some of us can remember ... when desegregation began to take place and in Little Rock, the governor stood in the schoolhouse door [blocking black students]. It took President Eisenhower to put 1,000 paratroopers, 101st Airborne on airplanes and send them to Little Rock where they escorted those black children into the white school.

"Gradually over time, people have learned that even though we on the Supreme Court are human and therefore may be wrong, it's still better to follow a rule of law than it is to shoot each other in the streets," Breyer said.

Breyer said he often asks his audiences which cases in history they dislike the most.

"But I heard Senator Reid say - and I suspect he didn't like that opinion, he's a Democrat leader, right? Here is an important case, very unpopular with half the country, and probably, in my opinion, wrong, but five thought it was right - he said the most remarkable thing about that case, which is something not often remarked: 'Despite that, people did not go into the streets and shoot each other. They did not riot. They did not.'

"Now, I'm talking to a college audience and sometimes say, 'I know what you're thinking: You're thinking Too bad! They should have rioted a little bit. And then I say, 'Before you make that judgment definitely, turn on the television set and watch what happens in countries that substitute violence.'"

"There is so much talk these days about liberal justices and conservative justices, and everything has seemed to become so political in this country," said anchor Erica Hill. "How political really is it when you all sit down and you're doing your job, or when you're in the lunch room together and you're doing these? I mean, is it really a political gathering?"

"But they're all significant cases," said anchor Jeff Glor.

"Good point. Well, what is it? Is it politics? No, I don't think it's politics. Not politics. Well, is it ideology? That isn't quite right. If I think I'm doing this because I'm an Adam Smith free enterpriser or a Maoist troublemaker or something, that isn't right.

"What is it? I grew up in San Francisco," said Breyer. "You begin to develop sort of basic beliefs - what is the country like, what is the law like, how they can relate - and people can come to that question with very different basic views. That difference of philosophy is what you sometimes see accounting for a decision. It's not politics."