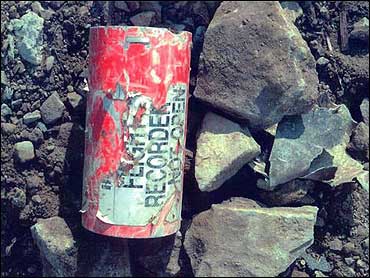 The dramatic final moments of United Airlines Flight 93 that were captured on a cockpit voice recorder can be played for a jury at the first trial stemming from lawsuits filed after the Sept. 11 terrorist attacks, a judge ruled Wednesday.

U.S. District Judge Alvin K. Hellerstein ruled that jurors can't listen to the entire tape but can hear portions that the hijacked passengers may have heard.

The relevant portions include a segment in which the voices of one or two of the apparent hijackers announce they have a bomb on board. He also said jurors could hear a 4-minute-long stretch of the sounds of passengers trying to force their way into the cockpit and retake the airplane.

The recording has never been publicly released, though it was played at the trial of Zacarias Moussaoui in Virginia, and relatives of the victims were allowed to hear it in private.

Phone calls to lawyers on both sides weren't returned after the ruling.

Forty passengers and crew members died when the hijacked plane crashed into a Pennsylvania field.

Flight 93, which was en route from Newark, N.J., to San Francisco, was the only one of the four planes hijacked Sept. 11, 2001, that did not reach its intended target, believed to be in Washington, D.C. Investigators believe the hijackers crashed the plane into a field near Shanksville, about 65 miles southeast of Pittsburgh, as passengers rushed the cockpit.

Some 41 cases have been filed against airlines, plane manufacturers, security agencies and the owners of airports, blaming them for letting terrorists take control of planes.

Typically, a jury first determines liability in a case, and then it decides on damages.

But Hellerstein has scheduled the damages phase in six cases to begin on Sept. 24, before any liability has been determined.

He said he took this unusual step in the hopes that more cases might settle out of court once families of victims get a sense of how much money they are likely to get from a jury.

The first trial will assess damages owed to the family of Patrick Joseph Driscoll, a New Jersey man who was on Flight 93.

Thousands of Sept. 11 victims' families have turned to a victims' fund established by Congress, rather than seeking compensation in court.

The September 11th Victim Compensation Fund, which Congress set up after the attacks, has paid $6 billion to 2,880 families of those who died, representing 97 percent of the families, the judge said. The fund also has dispensed more than $1 billion to 2,680 injured victims.