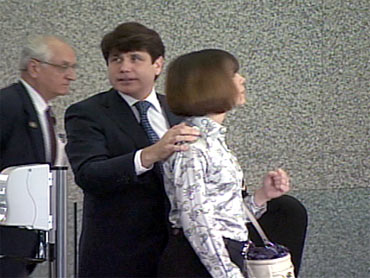 CBS Station WBBM in Chicago reports that Judge James Zagel says the verdict will be announced in about an hour after attorneys for both sides arrive at the Dirksen Federal Building.

Jurors deliberating the corruption case against former Illinois Gov. Rod Blagojevich asked the judge on Tuesday for advice on filling out their verdict forms, suggesting they are nearing the end of deliberations.

The jurors asked Judge James B. Zagel how they should mark the verdict form if they can't reach a decision on a count. In the first part of the note, they also asked for a copy of the oath they took before deliberating.

Zagel said in his response that they shouldn't mark the form if they haven't been able to reach an agreement on a count but should write a statement saying they couldn't agree. Zagel told them they should not indicate how many were for or against conviction on the charge.

He also said he would provide a copy of the oath, which says: "Do each of you solemnly swear that you will well and truly try, and a true deliverance make, in the case now on trial and render a true verdict according to the law and the evidence, so help you God?"

Tuesday was the 14th day of deliberations - and the fourth note in as many days of deliberations. The succession of notes appears to signal at least some disagreement in the jury of six men and six women.

Zagel said "the tenor of the note indicates there is at least a possibility a verdict may be returned this week."

In light of that, he ordered Blagojevich and his co-defendant brother Robert Blagojevich to be no more than a half hour away from the courthouse. He'd said previously that they could be as much as an hour away.

The Blagojevich brothers were not required to be in court for the reading of Tuesday's note - but the judge indicated they were on a phone line when he discussed the note in chambers with attorneys right before the hearing.

Prosecutors asked the judge to include in his note an additional instruction that jurors should "make every effort to make a unanimous verdict." Zagel declined - possibly hinting that he may be willing to accept a partial verdict and let jurors remain hung on some counts.

At least some observers say the request for guidance on filling out the verdict card suggests jurors may be near to announcing a decision.

"Because of the way the form is - I think they are struggling with how to mark it with a hung verdict," said Joe Rice, the head of the California-based Jury Research Institute.

He added that the request for the oath was unusual - something he's never heard of a jury asking for before. He says it suggests there's at least one dissenter on the panel.

"It is obvious they want to use the oath to sway someone in the minority on the jury and challenge them about whether they are honoring elements of the oath," Rice said.

An attorney for Robert Blagojevich agreed.

"Someone is going to be read that card and accused of not following their oath," Michael Ettinger, attorney for Robert Blagojevich, told reporters after the hearing. "Why else would they ask for that card?"

He added that he believes jurors have "gone as far as they can go."

In a note sent to the judge last Thursday, jurors said they had managed to agree on just two counts, couldn't reach a decision on 11, and hadn't even deliberated on 11 wire fraud counts.

Zagel sent a note back saying jurors should deliberate on the wire fraud counts. But he didn't say what action he might take if jurors weren't able to reach a consensus.

His options include accepting a partial verdict, then declaring the jury to be hung on the undecided charges.

CBS Station WBBM in Chicago reports that Ettinger said the jury's lack of agreement on some counts may warrant a new trial. But if the jury finds Blagojevich not guilty on some counts, "the trial is cut in half," he said.

On Monday, jurors had asked for transcripts of the testimony from former deputy governor Bradley Tusk and Zagel agreed to hand that over.

Tusk had testified that Blagojevich planned to hold up a $2 million grant to a school in then-U.S. Rep. Rahm Emanuel's district until his Hollywood-agent brother, Ari, held a fundraiser. Tusk said he ignored a Blagojevich directive to deliver the message to Emanuel, saying he thought the plan was "illegal and unethical."

Some trial observers saw the request for that testimony as a more hopeful sign for prosecutors. Notes toward the end of last week, though, seemed to offer the defense reason for optimism.

Blagojevich, 53, has pleaded not guilty to all 24 counts, including charges he tried to sell or trade Obama's old Senate seat for a high-paying job or campaign cash. His 54-year-old brother, Robert Blagojevich, a Nashville, Tenn., businessman, faces four counts and also pleaded not guilty.