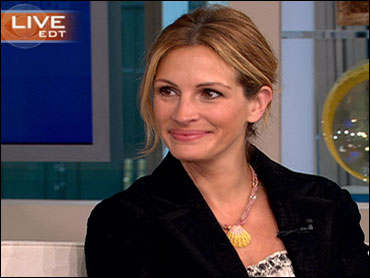 The starlet is reaching out to children -- and keeping the dream of another beloved Hollywood star alive.

On The Early Show Monday, Roberets discussed her involvement with Hole in the Wall Camps, a charity for ailing kids started by screen legend Paul Newman, who died last year.

She told Early Show co-anchor Harry Smith she began working with the charity 13 years ago, when she was looking for summer volunteer work. Her agent connected her with Newman, and since then, she said, the work has been "a joy" for her.

The effort was started in 1988 with Newman's first camp: "Hole in the Wall Gang Camp." The northeastern Connecticut retreat became a place where kids could be kids, no matter their medical condition.

Roberts said the camp made everyone a human being.

"For Paul as an actor and as a philanthropist," Roberts told Smith, "truly his greatest gift was making us all the same person in every way."

And since '88, camps have sprung up in all 50 states and 39 countries, and 164,500 children have been reached by the organization's free programs.

Roberts said her volunteer work has made her feel blessed to have three healthy children, and for her own health.

"I can share (the camp experience) with my kids (and) try to infuse gratitude for that which we -- so many of us -- may take for granted, which is our good health, our good feelings the moment we wake up in the morning."

Dexter Darden,a 17-year-old with sickle cell disease, joined Roberts on The Early Show. He attended the camp for eight years, and spent one summer as a leader-in-training. He'll return this year. Darden said Newman was on the same level as the campers.

"It's just astronomical to meet somebody like him of his status," Darden observed, "but to also (have him) be so down-to-earth. ... the way he dealt with us as campers, and just as human beings in itself, it was just amazing."

He said the camp opened up many doors for him, including learning how to swim. Darden said his disease makes his joints cramp up, but an apparatus at the camp helped him dry quickly, so he could swim without pain. He said that, because of the camp experience, he is now a certified lifeguard.

Darden added that Newman's death surprised many campers, because they were close to him. But he added that other celebrities, such as James Taylor and Roberts, are still volunteering and doing "a great thing."