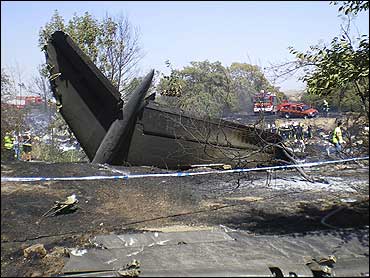 A Madrid court says the judge investigating the Spanair plane crash that killed 154 people in August has called three mechanics for questioning on suspicion of manslaughter.

A Madrid Superior Justice court spokesman said Thursday that the judge had called two mechanics who checked the plane before it took off and crashed, as well as Spanair's head of maintenance at Madrid's Barajas airport.

The official spoke on condition of anonymity in keeping with court regulations.

Earlier this month the first official report into the passenger jet crash said investigators were focusing on a problem with the plane's wing flaps and the failure of a cockpit alarm to sound.

It said no conclusions had been reached as to why the plane went down Aug. 20.

Investigators concluded the pilots were unaware of the faulty wing flaps because a cockpit alarm did not go off, according to a preliminary report issued in September.

Some of the 18 survivors have said the Spanair plane struggled to gain speed and altitude during takeoff. The aircraft crashed tail-first, bounced three times as it skidded through a grassy area near the runway, then largely disintegrated and burned after coming to a halt at the edge of a stream.

The investigation has been based on data from the MD-82's flight data and cockpit voice recorders.