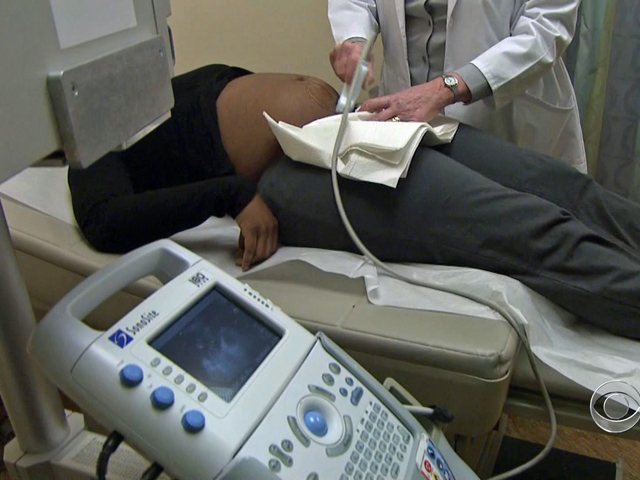 (CBS/AP) OKLAHOMA CITY -  An Oklahoma judge on Wednesday struck down a state law requiring women seeking abortions to have an ultrasound image placed in front of them and to listen to a detailed description of the fetus before the procedure.

District Judge Bryan Dixon ruled the statute passed by the Legislature in 2010 is an unconstitutional special law because it addresses only patients, physicians and sonographers dealing with abortions and does not address them concerning other medical care.

Former Democratic Gov. Brad Henry had vetoed the bill after it passed the state's Republican-controlled Legislature, warning at the time that the measure likely would lead to a "potential futile legal battle." Republicans managed to override the veto with the help of several anti-abortion Democrats.

Poll shows Virginia voters opposed to ultrasound bill
Is a required ultrasound a barrier to abortion?


But enforcement has been blocked since May 2010 when the Center for Reproductive Rights in New York challenged the law on behalf of Nova Health Systems, operator of Reproductive Services of Tulsa, and Dr. Larry Burns, who the group said provides abortions in Norman.

A lawsuit filed by the abortion-rights group claimed the statute violated the principles of medical ethics by requiring physicians to provide unnecessary and unwanted services to patients and discounting a woman's ability to make decisions about her pregnancy.

Nancy Northup, president and CEO of the Center for Reproductive Rights, said Dixon's decision reflects a backlash against state lawmakers who pass overreaching legislation she called hostile to women, their doctors and their rights.

"The court has resoundingly affirmed what should not be a matter of controversy at all - that women have both a fundamental right to make their own choices about their reproductive health, and that government has no place in their decisions," Northup said.

The author of the ultrasound statute, Rep. Lisa Billy, R-Lindsay, said she was disappointed with the ruling.

"I think women deserve to have all the information necessary before making that decision," Billy said.

She said doctors already were performing ultrasounds on women before performing an abortion and that her bill only required them to make the images available for women to view.

"It was an option if she wanted to view it," said Billy, who this year is sponsoring a measure to grant personhood status to a fertilized egg.

On Tuesday, Idaho's Republican-controlled Legislature also backed away from a bill requiring women who seek an abortion to get an ultrasound before the procedure.

The legislation stalled in the state House after Rep. Tom Loertscher said he wouldn't schedule a committee hearing, a move that ends the bill's chances this year.

Idaho lawmakers were considering a measure similar to one approved this year in Virginia and last year in Texas. At least five other states require some form of ultrasound before an abortion.