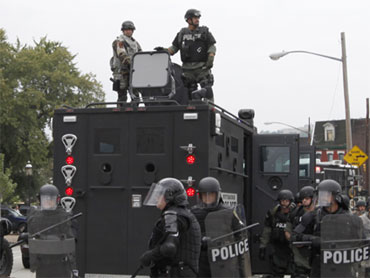 A judge said controversial sound cannons can be used by police during the G20 summit, but with restrictions.

The ruling today means the voice function of the devices is OK to use, but only at lower decibels; protesters say the devices can damage hearing permanently.

Before today's ruling police had said they would only use them as megaphones to broadcast pre-recorded voice messages to crowded demonstrations.

Also this morning Blair defended a law passed by the Ontario government to give police special detention powers during the G-8 and G-20 summits.

The regulation gives police the power to arrest anyone coming within five yards of the security fences erected around the summit site in Toronto if they refuse to identify themselves.

Blair said the regulation was passed under the Ontario Public Works Protection Act that dates back to 1939, and was simply extended to the G-20 security perimeter for one week.

Blair adds it was not a secret because it was published on the Internet as soon as it was passed. "If you google 'Public Works Protection Act, Ontario,' it's there," he said.

Kormos said despite a lot of talk about democracy and openness, the cabinet passed the new regulation June 2 without any debate in the legislature.

The law went into effect on Monday and will expire next Monday, after the G-20 wraps up in Toronto.

The Toronto Star reports that one arrest has already been made under the new rule, an environmental activist who was held for five hour in a wire cage. David Vasey said police told him "there was this bylaw. I didn't know what they were talking about."

Protests Start at Launch of Summit

The number of security forces protecting the summit meetings was estimated to total 19,000, drawn from all over Canada.

So far the protests have been quiet.

Activists said the $1 billion spent on summit security could have housed all the homeless people in Toronto, and all those on the waiting list for social housing, for one year.

They made their point while standing around a $12.99 kiddie pool they set up outside the media center where Prime Minister Stephen Harper's government erected a $57,000 fake lake featuring chairs on a dock looking out on a small pool of shallow water.

In the Muskoka lakes region town of Huntsville, where G-8 representatives are meeting today, Oxfam held a publicity stunt at the town docks with giant papier mache heads of the G8 leaders and posed them as tourists - complete with socks and sandals.

The group called for G8 leaders to declare water a human right.

"Here in Muskoka we are stewards of a great amount of water wealth and in doing so we really have to learn how to take care, become better stewards of the water that we live with here," said Kate Heming.

Oxfam ambassador and actor Bill Nighy was also on hand to be a "benign nuisance" to urge G8 leaders to put extreme poverty on their agendas.

Nighy, who has had roles in "Love Actually" and "Pirates of the Caribbean," recently went on a Comic Relief trip to Kenya, where he said he stood on a 2,500-acre trash dump comprised of chemical, medical and human waste.

"Five and six and upward year-old little girls and boys compete with wild pigs for rotting food, which may kill them anyway, and the female little girls have to give sex to the gangsters that run the trash dump so that they can get to the richer pickings where the fresh trash is in the middle," Nighy said.

"You'd have to really stretch your imagination to imagine anything worse."

The band of protesters carrying a few placards started from a park at the water's edge and marched a short way down the main street, escorted by police, before stopping to discuss where they were actually headed, and then turned around to go back the way they came.

On Thursday the designated protest zone - a large field on a backroad five miles from the G8 meetings - sat empty, except for a woman in one corner setting up a performance art piece.

Heming said her group decided not to protest in the designated zone precisely because no one was there.

"There's nothing going on at the designated free speech area," she said. "There's not much of a protest scene happening there."