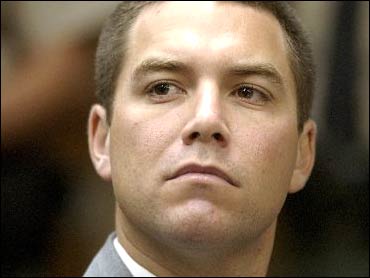 Scott Peterson will stand trial on two counts of murder for the death of his wife, Laci Peterson, and her unborn son, charges that could bring the death penalty, a judge ruled Tuesday.

Prosecutors presented a loose-knit web of circumstantial evidence that pointed toward Peterson from the moment he phoned his in-laws after returning home from an impromptu fishing trip on Christmas Eve last year.

The remains of his wife and her unborn son washed ashore in April about three miles from where Scott Peterson said he was fishing.

The defense contends that police suffered from tunnel vision once they locked their focus on Peterson.

The judge set an arraignment for Dec. 3 in Modesto.

CBS News Correspondent Manuel Gallegus reports detectives theorize Scott Peterson killed his wife on the night of Dec. 23, and that he transported her body in a 14-foot boat that no one knew he owned. Cement powder and a homemade anchor were found in the boat along with a strand of hair believed to be Laci's that was removed from a pair of pliers.

And finally, inconsistencies in Scott Peterson's own story and his odd behavior kept investigators focused on him. During the search, he visited the shores where the bodies washed up to three times.

A battle over a 6-inch strand of dark hair dominated the four weeks of testimony, with prosecutors winning the right to introduce DNA testimony linking the hair to Laci Peterson and connecting her to the boat prosecutors believe Scott Peterson used to ferry her to a watery grave.

On Tuesday, prosecutors presented their final two witnesses, investigators who said they had tracked Peterson's cell phone calls on the day his wife disappeared and the more than 240 calls between Peterson and his mistress.

There were very few days when there weren't calls between their phones, he said.

Modesto police Detective Jon Buehler said he plotted the cell phone calls that Peterson made on Dec. 24, tracking the calls by cell towers as Peterson traveled from Modesto to Berkeley and back.

"This is a prosecution victory but a completely expected one and it doesn't really change the dynamic or momentum of the case," says Cohen. "If anything, the defense probably helped itself more than prosecutors did throughout the long hearing by raising genuine questions about the strength of the evidence against Peterson."

"Now we will see several important defense requests, including a change of venue request, and I suspect the case will get to trial sometime next year," Cohen says.