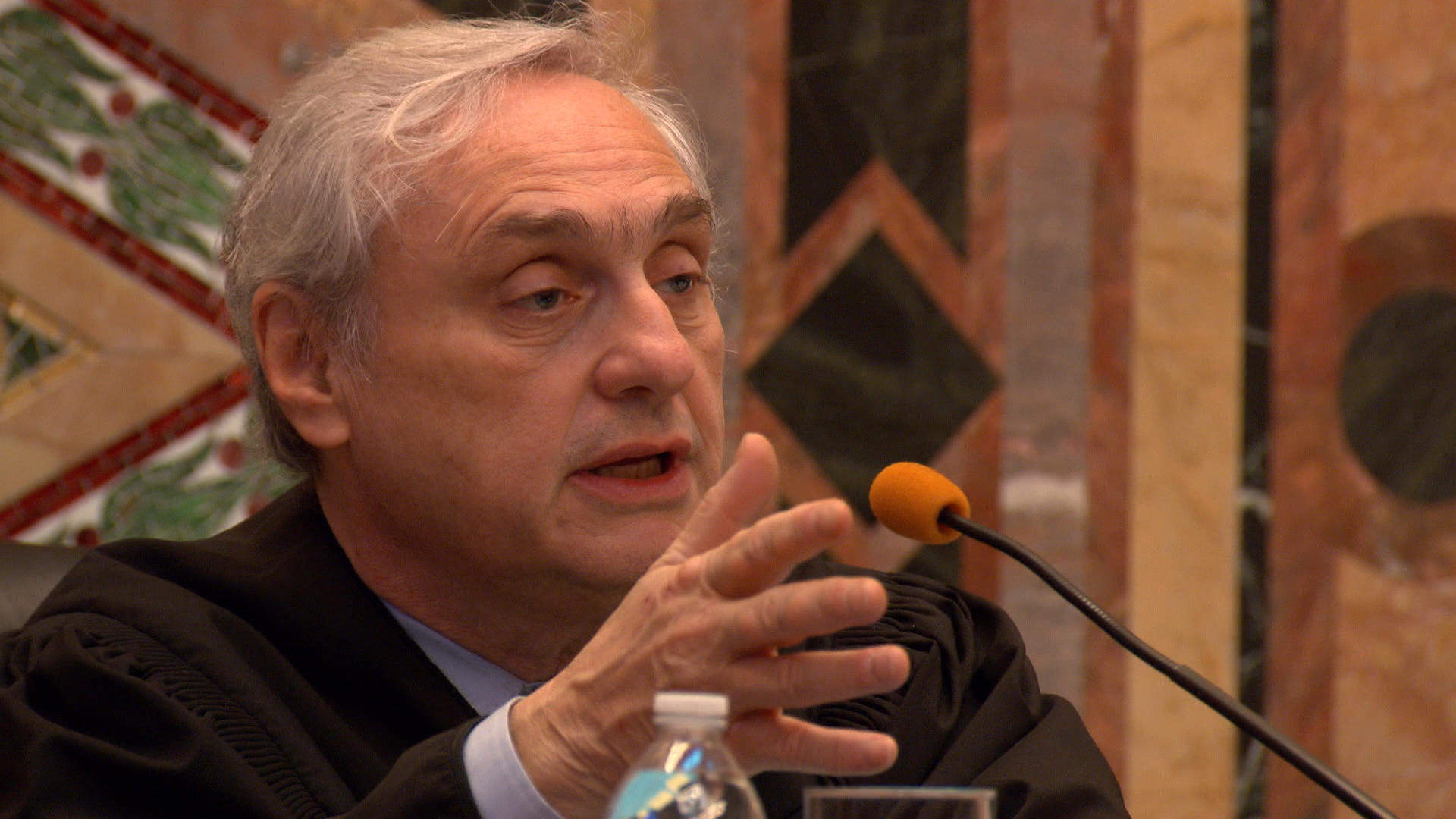 President Trump’s attempts to impose a ban on travelers from half a dozen Muslim-majority nations have been stymied by federal judges -- highlighting the power of the courts to act as a lever against executive power.

Tonight, we talk with a prominent and controversial judge on the 9th Circuit Court of Appeals, Alex Kozinski, a conservative appointed by President Reagan. His Court of Appeals, the nation’s largest, covering the Western United States, refused to lift the block on the president’s travel ban in February, and is scheduled to weigh in on the revised ban next month.

“My advice would be to whoever is going after judges by name, whether it’s the president or anybody else, I think it’s a terrible idea.” Judge Alex Kozinski

We sat down with Judge Kozinski to discuss his distrust of authority, his crusade against dishonest prosecutors, the so-called Muslim ban, and what he thinks of President Trump’s singling out and attacking federal judges.

Lesley Stahl: Let’s say, hypothetically, that President Trump decided to single you out, how would you handle it?

Alex Kozinski: Well, so long as he spells my name right, it’s OK.

Judge Alex Kozinski, one of the country’s most influential conservative federal judges, has some advice for the president.

Alex Kozinski: My advice would be to whoever is going after judges by name, whether it’s the president or anybody else, I think it’s a terrible idea. I don’t think it’s a very smart thing to do.

Lesley Stahl: Is there an etiquette that this isn’t done?

Alex Kozinski: I think that litigants before the court should be very careful about insulting the people who make the decisions.

Lesley Stahl: Are you suggesting the president needs to be careful?

Alex Kozinski: Yes, when the president is a litigant I think it’s wise for him not to comment on the judges. It’s not going to help anything—and all it’s going to do is emphasize the weakness of your position.

Alex Kozinski: I think it has that tendency, yes.

Trump rally: A judge has just blocked our executive order --

Not only has President Trump castigated individual judges, he has targeted Judge Kozinski’s 9th Circuit Court…saying it should be split in two.

Trump rally: “People are screaming break up the 9th Circuit. Take a look at how many times they have been overturned with their terrible decisions! Take a look.”

Alex Kozinski: The 9th Circuit can’t be split, and won’t be split. It’s a terrible idea.

Lesley Stahl: Why is it a terrible idea? The president himself has come after the Circuit saying that 80 percent of your decisions are overturned by the Supreme Court.

Alex Kozinski: Generally when the Supreme Court takes cases they take ‘em to overturn. They overturn something like 70 or 80 percent of all cases that they take. So, we are, right there, sort of in the middle.

Mr. Trump’s quarrel with the 9th Circuit heated up after it upheld a lower court’s blocking of his controversial travel ban.

In the opinion, the judges noted that during the campaign, candidate Trump made “numerous statements… about his intent to implement a Muslim ban,” which would be unconstitutional.  But in this case Judge Kozinski sides with the president. He wrote in a dissenting opinion that you can’t hold an elected official hostage to every statement made while campaigning, “when in truth the poor shlub’s only intention is to get elected.”

Lesley Stahl: In defending the travel ban you talked about the First Amendment.

Alex Kozinski: The First Amendment is really at the very core of political speech, and political speech is at the core of the First Amendment. So, we want to be very careful to make sure that candidates for office are free to express their views so that people will make an informed choice. We don’t want them holding back, and sort of concealing their views and then disclosing them afterwards.

Holding a candidate’s statements against him, he wrote: “will chill campaign speech.”

Lesley Stahl: What about when a president lies?

Alex Kozinski: Well, you’ve read the “Prince.”  Machiavelli said it is the duty of a prince to lie.

Lesley Stahl: Is that the way you see it?

“I think the use of lethal injection is the way of lying to ourselves, to make it look like executions are peaceful, are benign, are sort of like going to sleep, and they’re not.” Judge Alex Kozinski

Kozinski in court: You are being unreasonable.

Being provocative is classic Kozinski.

Kozinski in court: You could have said bam!

Another example: his support of the death penalty, but not by lethal injection.

Alex Kozinski: I think the use of lethal injection is the way of lying to ourselves, to make it look like executions are peaceful, are benign, are sort of like going to sleep, and they’re not.  They’re brutal things.

Alex Kozinski: Well, you know, it’s 100 percent effective and it leaves no doubt that what we are doing is a violent thing. If we as a society are willing to take away human life, we should be willing to watch it.

Lesley Stahl: You know, you’re very soft-spoken and you have a very placid look on your face and you say very outspoken, almost incendiary things like that. I think sometimes people sort of miss the provocation of what you’re saying.

Alex Kozinski: On the contrary, the softer you speak, the more the provocation is heard.

Judge Kozinski has spent over three decades on this bench at the 9th Circuit.  In his ruling on thousands of cases, there’s one constant: a deep-rooted distrust of authority which, like his thick accent, is a product of his childhood.

Alex Kozinski: I was born under Communism.

Lesley Stahl: Where were you born?

Alex Kozinski: I was born in Romania. And I know what it’s like to live in a system where you can’t speak, you have to whisper. Where the state is so pervasive and so intrusive.

Kozinski was the only child of Holocaust survivors who raised him a committed Communist, which he remained, even when his parents decided to defect when he was 11.

Alex Kozinski: As we were leaving Romania, we’re on the train, I still remember having these thoughts and plans about how I was going to start a Workers’ Revolution in the West. And then we got to Vienna, and I discovered chocolate, and bubble gum, and bananas!  And my god, I became an instant Capitalist!

By the time he and his parents moved to Los Angeles when he was 17, he was all-American with a streak of flamboyance -- as when he made his TV debut on the “Dating Game” – up against Squiggy of “Laverne and Shirley.”

Announcer: And we’ll try it with bachelor #1 first.  Will you please say “Good afternoon” to Rita.

Kozinski on “Dating Game”: Good afternoon, flower of my heart.

He got the girl but then -- she stood him up! He had better luck at UCLA law-school, where he finished top of his class and then landed a job in Washington working for President Reagan, who later appointed Kozinski to the prestigious 9th Circuit when he was just 35, the youngest in a century. He quickly emerged as a brilliant, conservative legal thinker… but with an independent streak.

Lesley Stahl: Well, do you know what’s the word that’s used most often to describe you?

Raising pet chickens… snow boarding… and, as you can see and hear on YouTube (aaaha) bungee jumping!

Lesley Stahl: Have there been setbacks in your career?

Lesley Stahl: You had one big setback. Public, embarrassing.

In 2008, he admitted to storing sexually-explicit photos and videos on a publicly accessible website.

Alex Kozinski: Oh I had a bunch of stuff on the computer and I didn’t lock it up.

Alex Kozinski: Some of it was raunchy.

He apologized, and he was admonished by a panel of judges.

Court: All rise. The United States Court of Appeals for the 9th Circuit is now in session.

Kozinski has made a name for himself with his readable and colorful court opinions.

Lesley StahlL: What’s the most outrageous thing that you’ve done as a judge?

Alex Kozinski: I thought somebody needed to come out in favor of lying, just as something that – so I wrote this opinion basically saying all the ways in which people lie all the time in their lives. You know, to avoid hurt feelings. You know, you’d say, “How do I look today, honey?” “Oh, you look wonderful!”

He concluded that with the exception of fraud and perjury, lying is a First Amendment right. Another big exception: prosecutors lying in court. He says he’s seen it too many times, and he’s on a crusade to stop it.

Alex Kozinski: There have been any number of documented instances of prosecutors doing things that are dishonest, slimy –

He lectures about prosecutorial conduct and rails about it from the bench.

Alex Kozinski, court video: See whether they really want to stick by a conviction that was obtained by lying prosecutors.

The judge says he’s seen prosecutors distort evidence, coach witnesses, pile on charges to force guilty pleas, and fail to reveal facts that could help or be exculpatory to the defense, which they’re legally required to do.

Lesley Stahl: How much of a stigma is it to not turn over exculpatory evidence? Is it a huge blemish on a prosecutor, on a lawyer?

Alex Kozinski: I don’t think so. I think they consider it feathers in their caps.

Alex Kozinski: Maybe they won’t admit it, but I think that’s how they see it.

Statements like these have earned him his fair share of criticism, including from his fellow judges.  But he wonders how many of the 2.2 million people behind bars are innocent.

Alex Kozinski: Even 1% would be 20,000 – 20,000 people. That’s a lot of people. And I think one percent is probably a fair guess. We have this notion in this country we’ve got the best system in the world.  It’s infallible. If anybody gets convicted, they must be guilty. It’s just not so.

Lesley Stahl: Where are all the other judges? They’re seeing the same thing you’re seeing.

Alex Kozinski: Some speak out. But judges, as a class, are not a speaking out group.

Lesley Stahl: So why are you doing it? Do you think it’s brave?

He feels the same way about politics, calling on his fellow federal judges to take President Trump’s criticisms in stride.

Lesley Stahl: There are those who believe that today, with the White House and Congress under Republicans, that it is incumbent upon the court system to do double duty.  To be the great balancer against perhaps overweening power.

Alex Kozinski: That’s certainly not our job. We are there to protect against abuses. But we’re not there to be a political counter-force.

Lesley Stahl: But what happens when two branches are in one hand?

Alex Kozinski: If they’re both in the same hands it means that the country, the people, want to move in that direction. I don’t think it’s the job of the judiciary to stand in the way.

Lesley Stahl: But do you feel an increased tension?

Alex Kozinski: It’s not that unusual for presidents to take strong positions on cases decided by the court. But you know, Lesley, that’s why the Constitution wisely gave us life tenure.  They can talk about us, but they can’t remove us.

The full story of the Ritchie Boys
Lesley Stahl