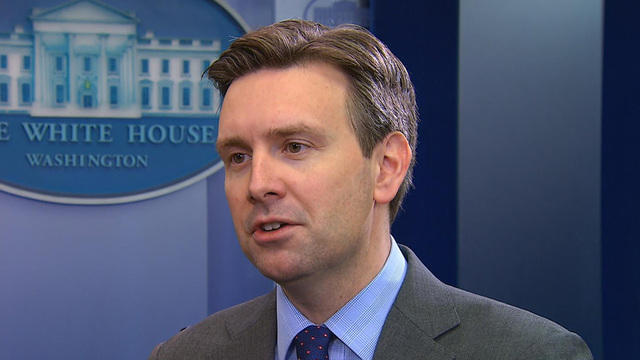 Just a day after President Obama commuted the prison sentence of Chelsea Manning, White House Press Secretary Josh Earnest pushed back on Republican anger over the move, suggesting it was hypocritical and “outrageous.”

The outgoing press secretary made the case in an interview with “CBS This Morning” Wednesday in the White House briefing room.

“The thing that I think is outrageous is for Republicans to say is that somehow Chelsea Manning deserves a more serious punishment because of her collusion with Wikileaks and its damage to the country when they endorsed a man for president of the United States who praised Wikileaks, who encouraged people to go and check out Wikileaks and who encouraged Wikileaks to collude with the Russians to hack his opponent,” Earnest said. “It is outrageous for them to suggest that right now what Chelsea Manning did is worse than what the man who they endorsed for president did.”

Mr. Obama, Earnest said, was interested in “making sure justice was served” for Manning, a transgender soldier whose 35-year sentence was conferred after she leaked government and military documents to the WikiLeaks website.

Pointing to Manning’s remorse for committing crimes and her serving in prison for more than six years, Earnest said “you’d be hard pressed to make the case that somehow the justice system went easy on her.”

The outgoing press secretary, who has engaged with journalists since 2014 on behalf of Mr. Obama, went on to express his appreciation for the White House press corps, amid speculation that the incoming Trump administration could soon relocate them out of the executive mansion.

Of Mr. Obama’s final press conference scheduled for Wednesday, Earnest said the president “wants to bid a farewell to the White House press corps” and to “show them the respect they’ve earned.”

Despite stories that Earnest says Mr. Obama wasn’t always “pleased with,” the press secretary acknowledged that “there’s supposed to be a friction in that relationship” between reporters and the government officials they cover.

“That kind of accountability made President Obama a better president,” Earnest said.

Asked to weigh in on Secretary of State John Kerry’s decision not to attend President-elect Trump’s inauguration, Earnest said he didn’t know what the plans were for all the Cabinet officials Friday.

“I can’t speak to Secretary Kerry’s plans,” he said, adding that “I don’t know what went into them.”

Education secretary says "we can keep our children safe" in schools