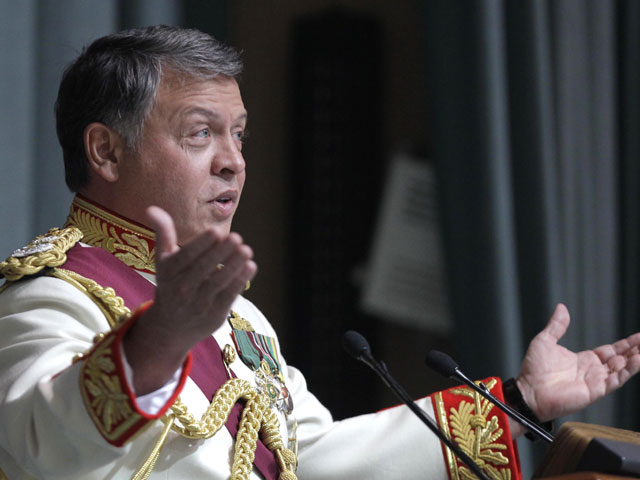 Jordan's King Abdullah said Tuesday that Syrian President Bashar Assad should step down, making him the first Arab ruler to issue such a call over the regime's deadly crackdown on an 8-month-old uprising.

The surprising statement comes as Arabs close ranks against Damascus. On Saturday, the Arab League voted to suspend Syria over attacks on protesters that the U.N. estimates have killed 3,500 people since mid-March.

"If Bashar (Assad) has the interest of his country, he would step down, but he would also create an ability to reach out and start a new phase of Syrian political life," Abdullah told the BBC in an interview.

The vote was a stinging rebuke to a regime that prides itself as a bastion of Arab nationalism and left Syria increasingly isolated over its crackdown.

"We wanted the role of the Arab League to be a supporting role, but if the Arabs wanted to be conspirators, this is their business," al-Moallem said at a news conference in Damascus, betraying his country's deep alarm over the decision.

The vote to suspend Syria — a major boost for the Syrian opposition — put Damascus in direct confrontation with other Arab powers, including Qatar and Saudi Arabia, who were pushing for the suspension.

The unified Arab position also puts more pressure on the U.N. Security Council to impose sanctions, despite objections by Syrian allies Russia and China. Of the Arab League's 22 members, only Syria, Lebanon and Yemen voted against the suspension of Syria, with Iraq abstaining.

A similar Arab League decision to suspend Libya's membership earlier this year paved the way for the U.N.-mandated no-fly zone and NATO airstrikes that eventually brought down Moammar Gadhafi, but the group has stressed international intervention was not on the agenda in Syria.

Still, al-Moallem played on fears that the diplomatic campaign could escalate to Libya-style military action, saying Syria's army is far stronger than Libya's.

"They know that our valiant army has capabilities that they might not be able to tolerate if they are used," he said.

Assad asserts that extremists pushing a foreign agenda to destabilize Syria are behind the country's unrest, rather than true reform-seekers aiming to open the country's autocratic political system.

Syria has asked the Arab League to convene an emergency Arab summit to discuss the country's spiraling political unrest. Critics say that is another possible bid by Assad to buy time as he faces snowballing punitive action.

An Arab League official in Cairo said the call for a summit would be discussed by Arab foreign ministers during their meeting in Rabat, Morocco, on Wednesday.

There are several obstacles, however, including a requirement that any call for a summit must come from the leader of the nation holding its rotating presidency, the official said, speaking on condition of anonymity because he wasn't authorized to brief the media. Currently that is Libya, but the country has just emerged from civil war and only has interim leaders.

In Brussels, European Union foreign ministers decided Monday to impose additional sanctions on 18 Syrians and organizations in response to the killings of protesters.

The names of those sanctioned will not be known until they are published in the EU's official journal in a day or two. Sanctions generally include visa and travel bans on people, the freezing of assets, and prohibitions on trade.

The EU has already placed sanctions on 56 Syrians and 19 organizations in its effort to get Assad to halt his bloody crackdown, and has banned the import into the EU of Syrian crude oil.

Earlier, Syria invited Arab League officials to visit before the membership suspension is scheduled to take effect on Wednesday, and said they could bring any civilian or military observers they deem appropriate to oversee implementation of an Arab League plan for ending the bloodshed.

The Syrian government is usually loath to accept anything resembling foreign intervention, and the invitation signaled the government's concern over the Arab action.

The crisis has raised regional tensions, with Turkey sending a plane to evacuate nonessential personnel after Saturday attacks on several embassies including Ankara's by Syrian government supporters angry over the Arab League decision.

Turkish foreign minister Ahmet Davutoglu said Monday that his country would take a "decisive attitude" in the face of attacks on its missions in Syria, and will continue his country's policy of supporting the Syrian opposition.

Turkey also formally protested the attacks and issued a warning against traveling to Syria.