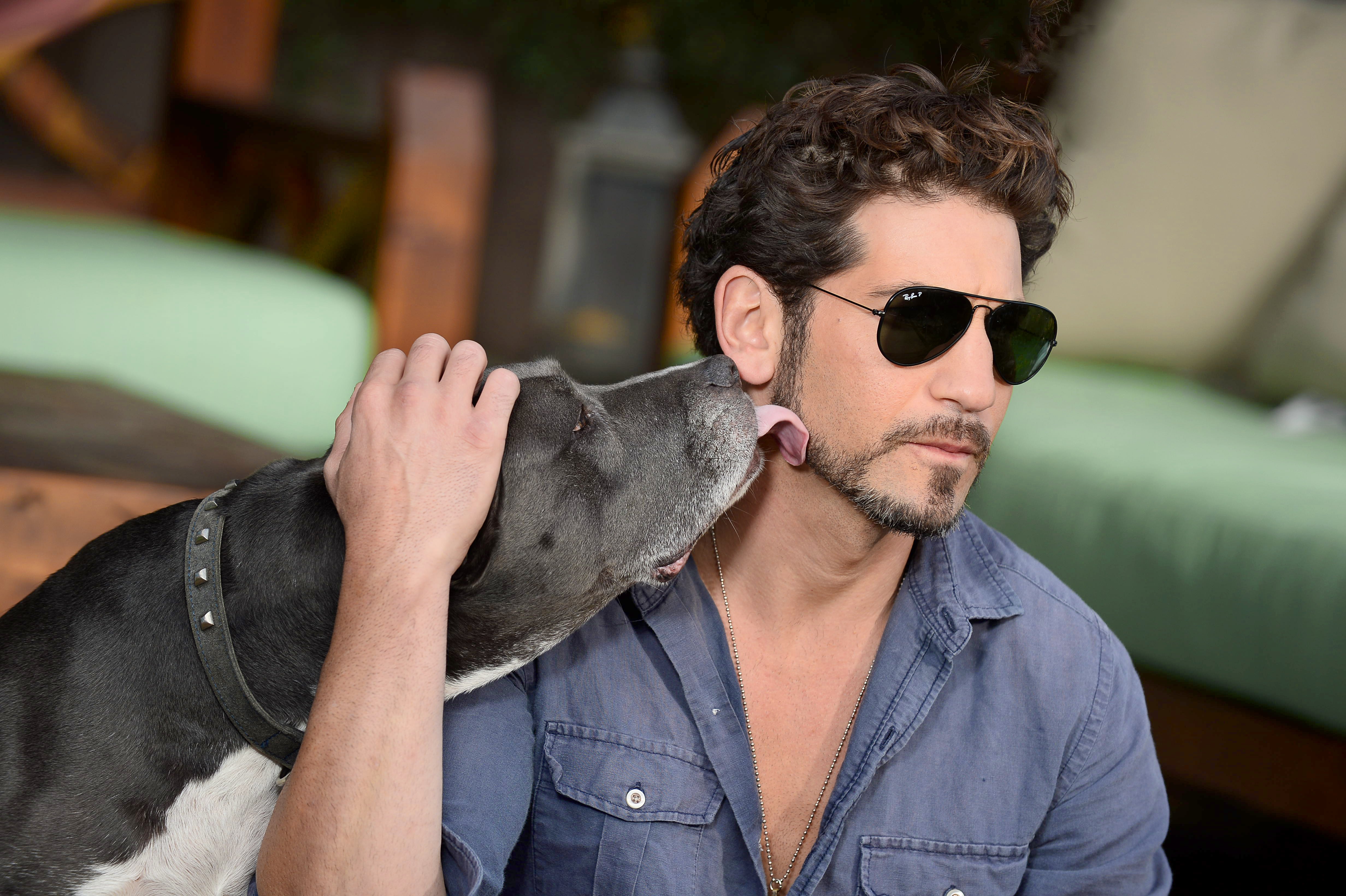 Jon Bernthal recently wrapped up a movie shoot and started another one immediately afterwards.

Essentially, the actor hasn't slowed down since his character, Shane Walsh, got killed off the hit AMC series "The Walking Dead" in 2012.

Coming up for the Hollywood star are roles in the the thriller "Shot Collar" with Lake Bell; "The Accountant" opposite Ben Affleck and Anna Kendrick; and "Sicario," alongside Emily Blunt ("she's wonderful...and a bad-ass," he says).

"It's definitely been crazy. Since 'The Walking Dead' I haven't really stopped and somehow I managed to have three kids since then and get married. I'm constantly on the run -- it's just me and my pit bulls and my truck. And we're bouncing from one set to another," Bernthal told CBS News while on the phone, driving through Arizona last week.

"They come to every audition, every meeting," said the 38-year-old actor, born and raised in Washington, D.C. "There's not a single day of 'The Walking Dead' that I was on that Boss and Venice weren't with us."

Not only does Bernthal have two pit bulls of his own, he also takes in fosters before finding forever homes for the pups.

"Our dogs are part of our family," said the father-of-three.

Bernthal had dogs while growing up, and his father, Eric Bernthal, is current chairman of the board of the Humane Society of the United States. And the actor is also an animal advocate, recently doing a PSA for the non-profit Animal Farm Foundation, to help debunk stereotypes about pit bulls.

The Majority Project PSA from Animal Farm Foundation on Vimeo.

"I think these dogs face enormous prejudice out there in the world and the ramifications of that are as benign as people crossing the street every time they see a pit bull, and I think they can become as acute as people getting kicked out of their apartment building and forced to separate from their pets. Certain places won't let breed-specific dogs in an apartment building or a rented home," said Bernthal, who added, "A pit bull is a great family pet. You have thousands of these dogs in these shelters looking for homes, and unfortunately the stigma attached to the dog keeps people from adopting them."

Which is why Bernthal is inviting dog owners to join "The Majority Project," a photo collection offering a real-life snapshot of pit bull dog owners.

So, it won't be too surprising if Bernthal brings his dogs to his next big gig: Netflix's "Daredevil." He was recently cast as Frank Castle/The Punisher in season 2 of the superhero series, which co-stars Charlie Cox, Vincent D'Onofrio and Deborah Ann Woll.

"I'm extremely honored and grateful, and I know the character has a ton of fans out there. I give every single one of them my word that I'm going to give it my all," Bernthal said about the fan favorite character.

Bernthal is looking forward to being part of a TV series again. After all, it's been three years since he parted ways with "The Walking Dead." And although he's longer on the show, Bernthal says he keeps up with a lot of his pals.

Nowadays, Bernthal is enjoying sitting on other side of the television, watching "The Walking Dead" from afar.

"I think the challenge is for the guys now is to keep the integrity of the show that it started with...I think they've been very successful at doing that. It's really cool now to sit back and be a fan...That's sort of the best part of dying from that show is no more scripts no more knowing what's going to happen. Every time I talk to those guys I gotta make them promise not to tell me everything."