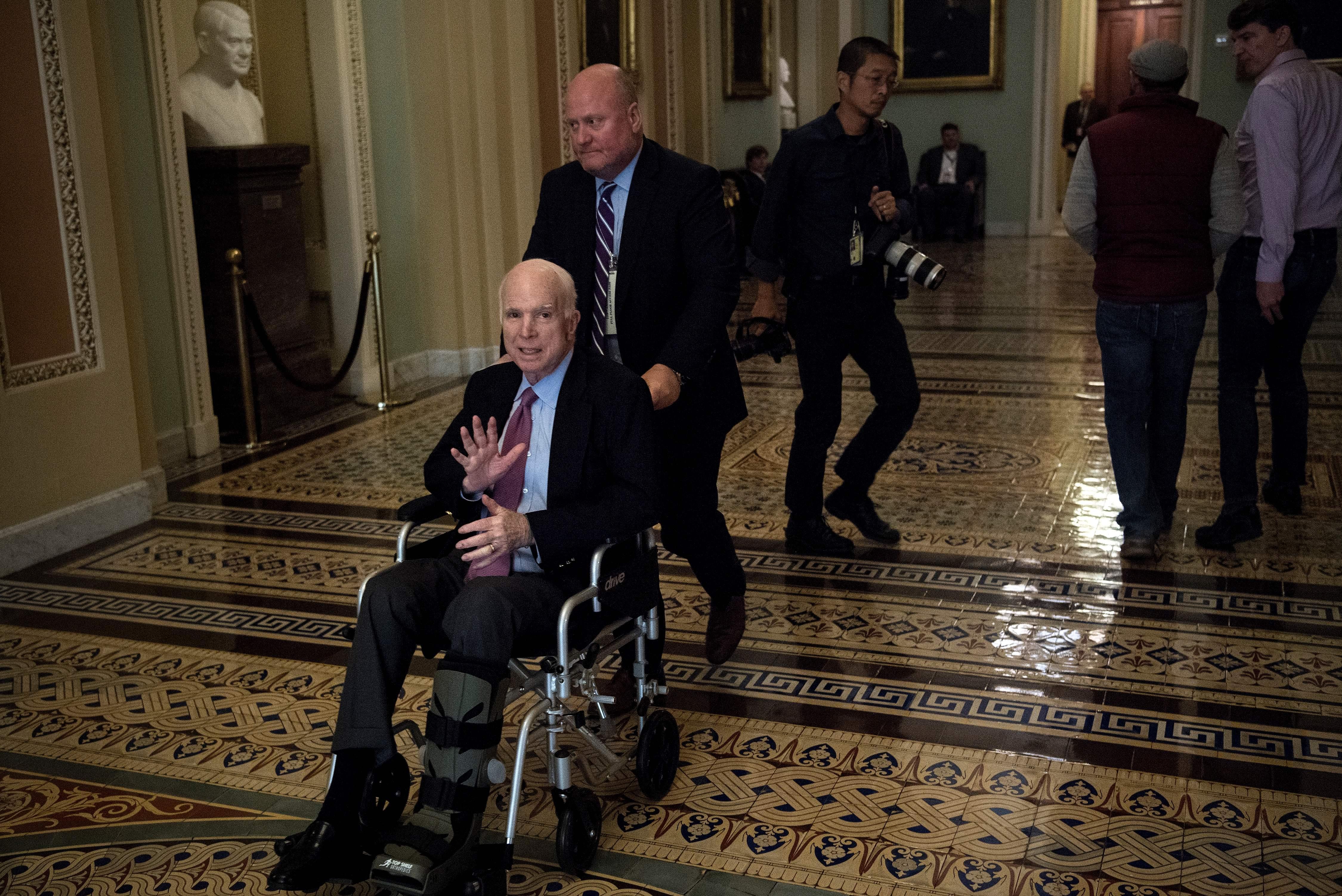 Republican Sen. John McCain returned home to Arizona after spending several days in a Maryland hospital recovering from side effects from chemotherapy treatment for brain cancer, CBS News has learned. He will spend the holidays with his family and will not be on hand for the final vote on the GOP tax passage expected this week. He's expected to return to Washington in January.

In a statement citing Dr. Mark Gilbert, Chief of Neuro-Oncology at the National Institutes of Health's (NIH) National Cancer Institute, McCain "has responded well to treatment he received at Walter Reed Medical Center for a viral infection and continues to improve. An evaluation of his underlying cancer shows he is responding positively to ongoing treatment."

In addition, McCain's office said he will undergo more treatment at the Mayo Clinic:

"Senator McCain has returned to Arizona and will undergo physical therapy and rehabilitation at Mayo Clinic," the statement read. "He is grateful for the excellent care he continues to receive, and appreciates the outpouring of support from people all over the country. He looks forward to returning to Washington in January."

Despite a razor-thin margin needed to pass the measure, McCain's presence will not likely be the determining factor in the vote. Two critical senators -- Bob Corker of Tennessee and Marco Rubio of Florida -- announced their support for the bill last week after initially saying they would oppose earlier versions.

GOP leaders aim to hold floor votes this week, with the House expected to take up the measure first on Tuesday.

Earlier on Sunday night, President Trump returned to the White House and told reporters that McCain is "going through a very tough time, there's no question about it."

Mr. Trump also mentioned that "[McCain will] come back if we ever needed his vote" and said that he spoke with Cindy McCain and wished her and John well.

McCain, 81, has been receiving treatment at Walter Reed National Military Medical Center in Bethesda, Maryland, since Wednesday. His son-in-law said on "Face the Nation" Sunday that McCain had been "in good spirits."

"I'm happy to say that he's doing well. The truth is that as anyone knows whose family has battled cancer or any significant disease that oftentimes there are side effects of treatment that you have. The senator has been through a round of chemo and he was hospitalized this week at Walter Reed," said Ben Domenech, a conservative writer and husband of Meghan McCain.

McCain's daughter later thanked supporters for their "kind words" in a Sunday afternoon tweet, echoing her husband's statement to CBS News that her father was "doing well" and was looking forward to "spending Christmas together in Arizona."

McCain was admitted to the hospital for what his office called "normal side effects" of his cancer treatment.

A Senate Armed Services Committee hearing opened Thursday without McCain in the chairman's seat and members of the panel unsure when he'd return to Congress.

Sen. John Cornyn of Texas, the second most senior Republican, told reporters last week that he expected McCain to be back  after "resting up."

Sen. Lindsey Graham of South Carolina, a close friend of McCain, likewise said he had "not focused on the tax bill right now when it comes to Sen. McCain. I'm focused on his health."

Now in his sixth Senate term, McCain underwent surgery in mid-July to remove a blood clot from above his left eye after being diagnosed with an aggressive tumor called a glioblastoma, the same disease that killed Massachusetts Sen. Ted Kennedy.

McCain's diagnosis, however did not prevent him from participating in another key vote -- the repeal of the Affordable Care Act.

McCain's vote was a critical factor in the failure of the Republicans' efforts to repeal the Affordable Care Act in July. McCain was one of only three GOP senators to vote against the measure, which came in dramatic fashion in the early morning hours.

When reporters asked why he cast a "no" vote on the health care bill, McCain said he "thought it was the right thing to do." Shortly after the dramatic vote, he returned home to Arizona to begin radiation and chemotherapy treatments.

But McCain's condition has appeared to worsen lately. He suffered a minor tear in his right Achilles tendon, forcing him to wear a walking brace. He eventually began using a wheelchair with members of his staff assisting him.

Some of the symptoms of glioblastoma, according to CBS News chief medical correspondent Dr. Jon LaPook, include headache, general malaise, visual problems and speech problems.

McCain is not the only senator sidelined by health problems. Sen. Thad Cochran, 80, of Mississippi, had a non-melanoma lesion removed from his nose earlier this week.

A spokesman for Cochran told CBS News last week that the senator went through an outpatient procedure and "is doing well and is available for votes as needed."