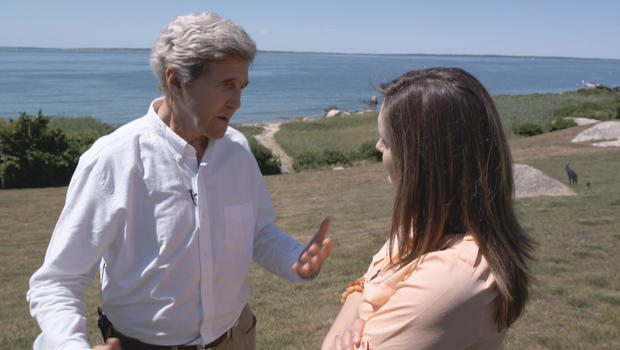 Former Secretary of State John Kerry won't rule out a run for the White House in 2020, but talking about it now is just a distraction, he tells "Face the Nation" anchor Margaret Brennan. The interview will be featured September 2 on CBS' "Sunday Morning" and on "Face the Nation."

Kerry (whose new memoir is titled "Every Day Is Extra") also talks with Brennan about his role in politics today, the current political environment, his relationship with the late Sen. John McCain, and his wife, Teresa Heinz Kerry.

Now in private life, the former Massachusetts senator and Secretary of State under President Obama has watched as much of his political legacy – including the Iran nuclear deal and the climate change accord – has been upended under the Trump administration. Disappointment in those actions has motivated Kerry to attempt to help Democrats regain political control.

"Talking about 2020 right now is a total distraction and waste of time," Kerry told Brennan. "What we need to do is focus on 2018. We need to win back the confidence of the country to move in a better direction, and to do it in sensible ways."

Kerry also shares regrets about his 2004 bid for the White House, including the choice of then-Sen. John Edwards as his running mate. [Edwards was later caught up in a sex scandal.]

Does he regret the decision today? "If you measure the qualities that you are looking for when you choose a vice president," he said, "it didn't measure up. It wasn't what we had hoped for."

Mary Hager is the executive producer of the Emmy Award-winning "Face the Nation" (10:30-11:30 a.m. ET), one of the longest-running news programs in the history of television.