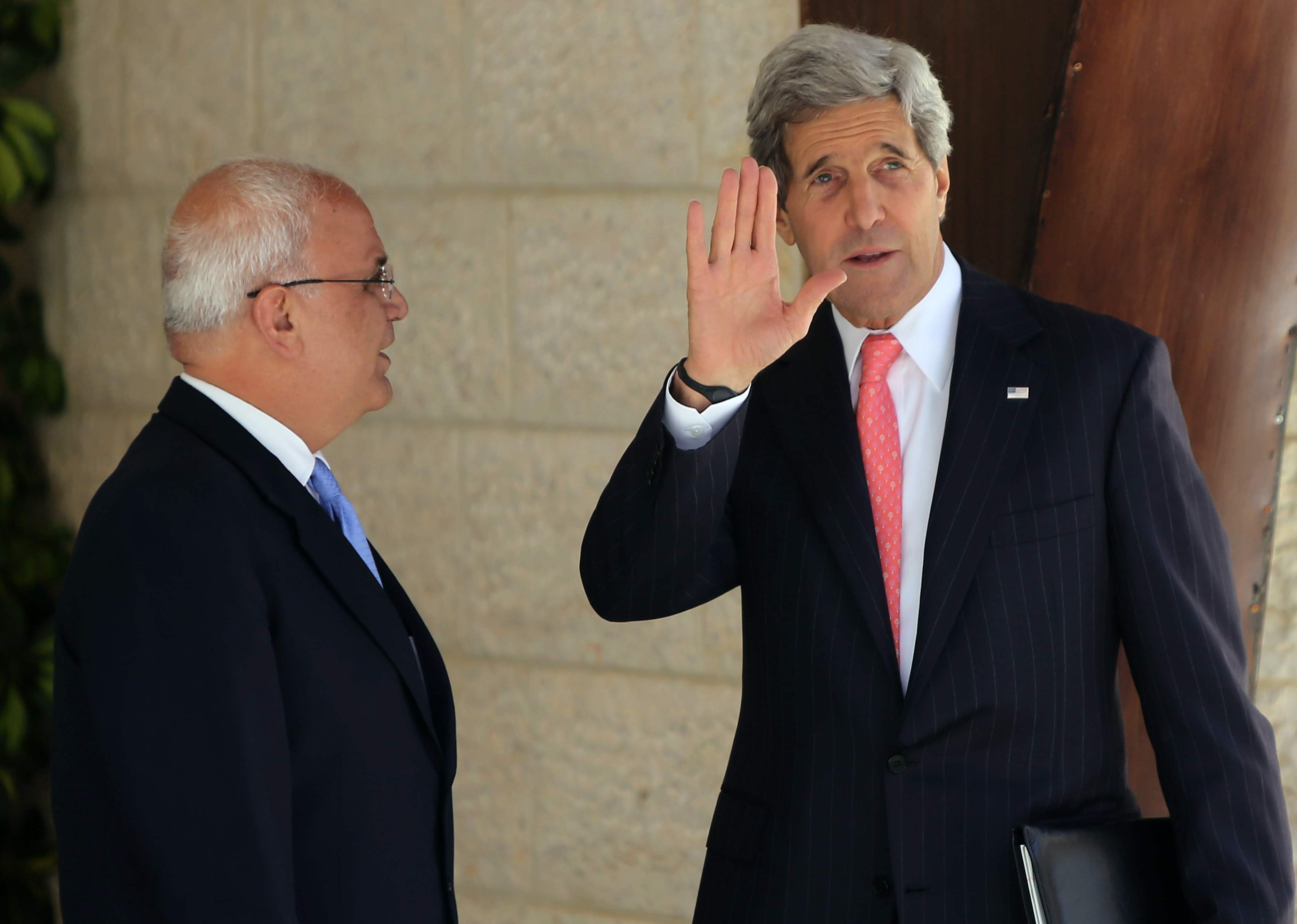 AMMAN, Jordan After Palestinian leaders demanded further guarantees before restarting talks with Israel, U.S. Secretary of State John Kerry discussed his ideas with the chief Palestinian negotiator in Amman on Friday, and decided to continue his efforts later in the day in the West Bank with Palestinian leader Mahmoud Abbas.

The demand cast a cloud of uncertainty over months of U.S. mediation efforts because Israel rejects preconditions.

Hoping to push Israelis and Palestinians toward talks, President Obama asked Israeli Prime Minister Benjamin Netanyahu to work with Kerry "to resume negotiations with Palestinians as soon as possible," according to a statement released by the White House late Thursday.

No details were immediately available about Kerry's meetings Friday with Erekat, the first of which lasted about an hour and the second, after a short break, an hour and a half. Neither of the men spoke publicly after the meetings, but the U.S. State Department confirmed that Kerry would travel to the Palestinian territory of the West Bank to meet Erekat's boss, Palestinian Authority President Mahmoud Abbas, later Friday.

The Palestinians demand is that the starting point for border talks must be the cease-fire line that held from 1949 until the 1967 war, when Israel captured the West Bank. Gaza Strip and east Jerusalem. Israel withdrew from Gaza in 2005.

Palestinians claim those territories for their future state, with modifications reached through agreed land swaps that could allow major Jewish settlement blocs built in the West Bank becoming part of Israel proper, in exchange for territories in Israel.

Previous Israeli governments twice negotiated on the basis of the 1967 lines, but no peace accord was reached.

Palestinian official Wasel Abu Yussef said Erekat would ask for more clarifications from Kerry on what Israel expects from negotiations.

The Palestinians did not bring up their often-repeated demand that Israel stop building in Jewish settlements in the West Bank and east Jerusalem before talks could resume. One official said that if Israel accepts the 1967 lines as a basis, that would make most of the settlements illegitimate.

CBS News correspondent Margaret Brennan reported Friday that the Israelis have come under increasing pressure -- particularly from Europe -- for their increasing settlement construction on Palestinian land.

The EU holds that Jewish settlements in territories such as the West Bank and east Jerusalem are illegal. EU foreign policy chief Catherine Ashton said the document released Friday was "meant to clarify the EU's position" and was not meant to harm efforts toward Mideast peace. The new rules come into force Jan. 1. Very little EU funding currently goes to Israeli bodies in occupied territories.

While Kerry has not publicized details of his plan, the Arab League's decision Wednesday to endorse his proposal raised speculation that the Palestinians would agree. Abbas traditionally has sought the blessing of his Arab brethren before making any major diplomatic initiative.

U.S. officials played down hopes that negotiations would begin soon.

"There are currently no plans for an announcement on the resumption of negotiations," Jen Psaki, a spokeswoman for Kerry, told reporters in Jordan. An Israeli Cabinet minister said no deal was imminent.

Kerry has been shuttling for months in search of a formula to allow resumption of talks after a nearly five-year break. Talks have been stalled since late 2008.

He said Kerry would endorse the 1967 lines as the starting point of negotiations and assured the Palestinians that Israel would free some 350 prisoners gradually in the coming months. The prisoners would include some 100 men that Israel convicted of crimes committed before interim peace accords were signed in 1993. Israel has balked at freeing these prisoners in the past because many were convicted in deadly attacks.

Although the plan does not include a settlement freeze, it was not clear whether Israel would accept any reference to the 1967 lines.

Israeli Cabinet minister Yair Lapid said it was "too early to say" whether Kerry had found a formula for talks.

"Secretary Kerry has done a tremendous job in trying to put both sides together," he told The Associated Press. "Of course Israel is more than willing and has expressed its agreement to go back to the negotiation table, but apparently it's going to take a little more time."

While Israel has balked at Palestinian demands, the international community has largely rallied behind the Palestinian position on borders and Jewish settlements.