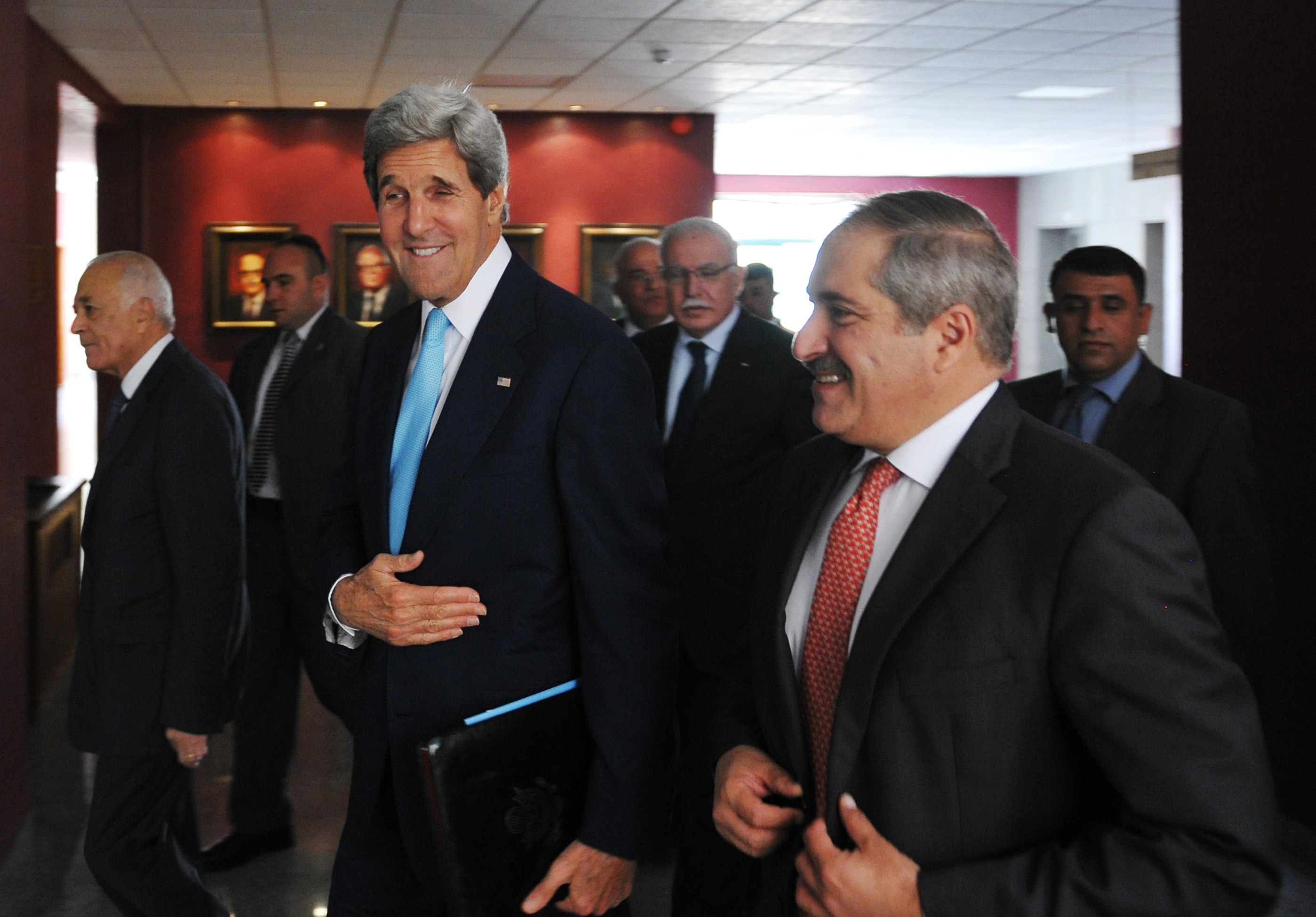 AMMAN, Jordan U.S. Secretary of State John Kerry briefed senior Arab officials Wednesday on his efforts to restart Israeli-Palestinian peace talks and on American views of the crises in Syria and Egypt.

On his sixth trip to the region in as many months as America's top diplomat, Kerry met in Jordan with representatives of the Arab League and nine of its members that support a comprehensive Arab-Israeli peace plan proposed by Saudi Arabia. The Arab leaders endorsed Kerry's approach to restarting peace talks.

In addition to the peace process, Kerry was updating the Arabs on U.S. support for the Syrian opposition and attempts to convene an international conference to establish a transition government there, as well as Washington's position on Egypt's political turmoil.

The gathering came a day after Kerry had a five-hour dinner meeting in Amman with Palestinian leader Mahmoud Abbas. Officials said Kerry and Abbas discussed the way forward and projects aimed at bolstering the Palestinian economy. No further details were available, and Kerry and Abbas were planning to meet again Wednesday.

It remained unclear whether Kerry would meet Israeli Prime Minister Benjamin Netanyahu or any of his top aides on his trip. Israel is not currently on Kerry's itinerary, although officials said that could change.

A joint statement issued by Kerry and the Arab League delegation after talks Wednesday appeared to give Arab backing to the secretary's ideas for restarting the Israeli-Palestinian talks.

"The Arab delegates believe Kerry's ideas proposed to the committee today constitute a good ground and suitable environment for restarting the negotiations, especially the new and important political, economic and security elements," the statement said.

Abbas has refused to negotiate unless Israel halts all construction in West Bank settlements. Israel has refused, saying negotiations should resume without conditions. Kerry has offered the Palestinians a package of economic incentives to restart the talks.

Kerry has spent hours with Abbas and Netanyahu trying to set the stage for a return to peace talks that foundered and collapsed in 2008. Kerry insists progress has been made but there have been few, if any, discernible signs that the two sides are getting closer to agreeing to discuss the major issues that divide them.

Kerry said Tuesday after talks with Jordanian Foreign Minister Nasser Judeh that he wanted to see a Syrian refugee camp, and it appeared likely that if such a visit is arranged, it would happen Thursday before he is scheduled to return to the United States. Judeh said Kerry had expressed concern about the economic impact the humanitarian crisis in Syria has had in Jordan, which hosts more than a half million displaced Syrians.

Should the visit materialize, it would be the first by an Obama administration Cabinet-level figure to Syrian refugees, some of whom have complained about a lack of U.S. support. Syrian rebels have also complained that they are not receiving promised military assistance from Washington.

Later Wednesday, Kerry is to meet Jordan's King Abdullah II and then brief reporters at a news conference with Judeh.