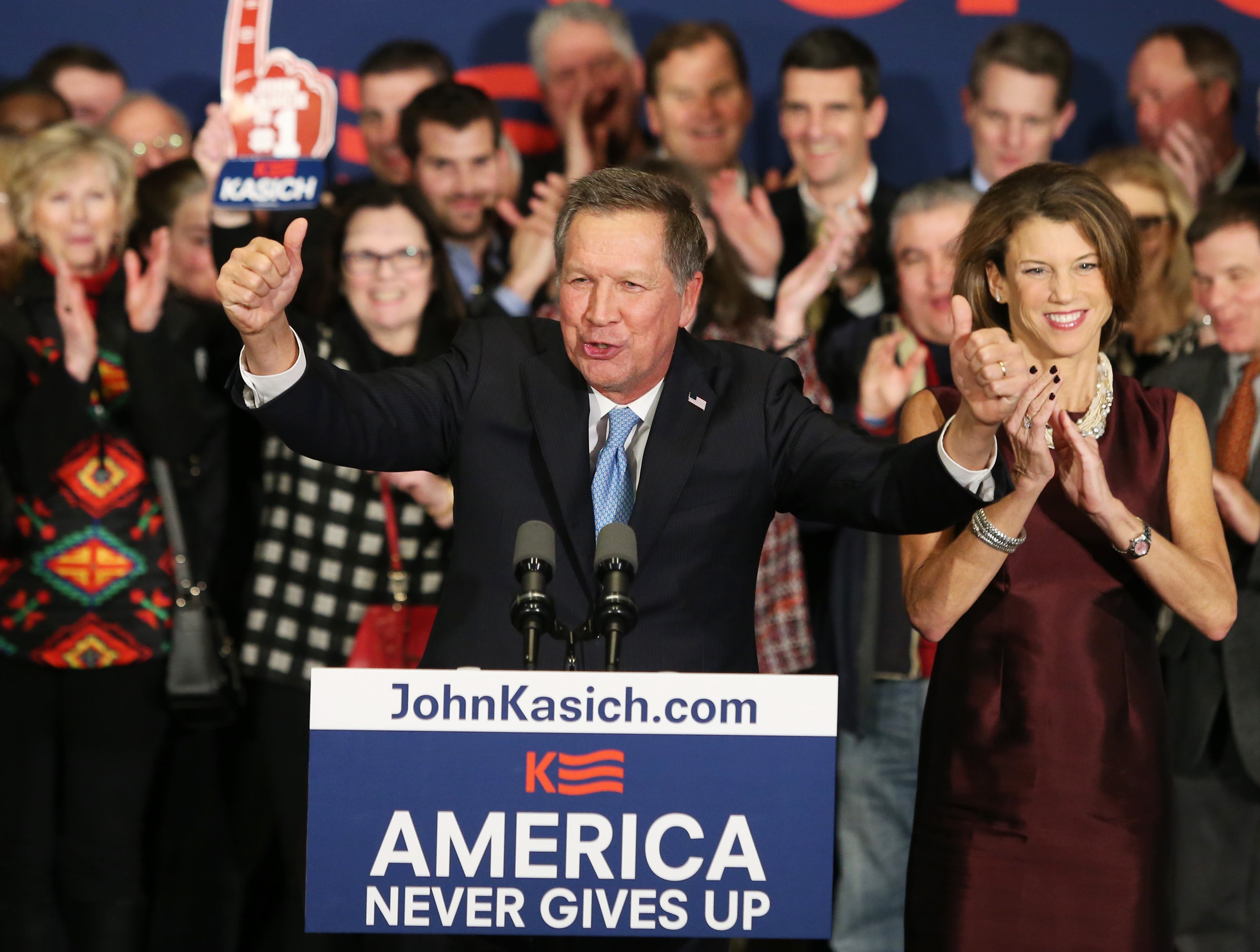 Ohio Gov. John Kasich's singular focus on the state of New Hampshire paid off Tuesday night when he secured a second-place victory in the first-in-the-nation primary.

With 79 percent of the vote counted, Kasich had the support of 16 percent of New Hampshire Republican primary voters. While he was still far behind first-place finisher Donald Trump, who had 34 percent of the vote, Kasich put a few points between himself and the three other candidates battling it out for third place.

"Something big happened tonight and let me tell you what it is...we have had tens and tens of millions of dollars spent against us with negative advertising," Kasich said in his speech. "We never went negative because we have more good to sell than to spend our time being critical of somebody else."

"And maybe, just maybe, at a time when clearly change is in the air, maybe just maybe we are turning the page on a dark part of American politics because tonight the light overcame the darkness of negative campaigning, and you made it happen," he added.

Kasich was one of three current and former governors to stake his entire early strategy on a strong finish in New Hampshire. He spent 69 days in the Granite State since state since the start of last year, more time than any other candidate except New Jersey Gov. Chris Christie.

But it was Kasich who saw the most success among his fellow governors: former Florida Gov. Jeb Bush is still locked in a tight battle for third place with Sens. Marco Rubio of Florida and Ted Cruz of Texas. And Christie, mired in sixth place with 8 percent of the vote, is heading home to New Jersey to reassess his campaign instead of continuing on directly to South Carolina.

Kasich spent much of his speech talking about how he had been influenced by campaigning in New Hampshire (during 106 town halls) and the people he met. He closed with a message encouraging people to "slow down" and talk to their family and neighbors. It fit with the broader message he touched on in his speech, about uniting the country. He pledged to "spend my time listening and healing and helping to fix our country."

There was room for a quick crack at the Democrats, though.

"Bernie talked so long I thought he was going to hit his 77th birthday," Kasich joked, referring to Sen. Bernie Sanders, who won the Democratic primary.

Kasich performed well among voters who said that Saturday's Republican debate had factored into their voting decision, as well as with voters who supported candidates in the "establishment lane" of the primary (Kasich, Bush, Christie and Rubio). Kasich won 28 percent of their support.

He also did well among the voters who see the economy as the most important issue facing the country, winning 24 percent of their votes.

Kasich's campaign said he will leave for South Carolina Thursday night, and that he is now poised to "accumulate delegates in the early primary calendar before winning Michigan and taking the nomination battle to the Midwest, the home turf where he will win the nomination."