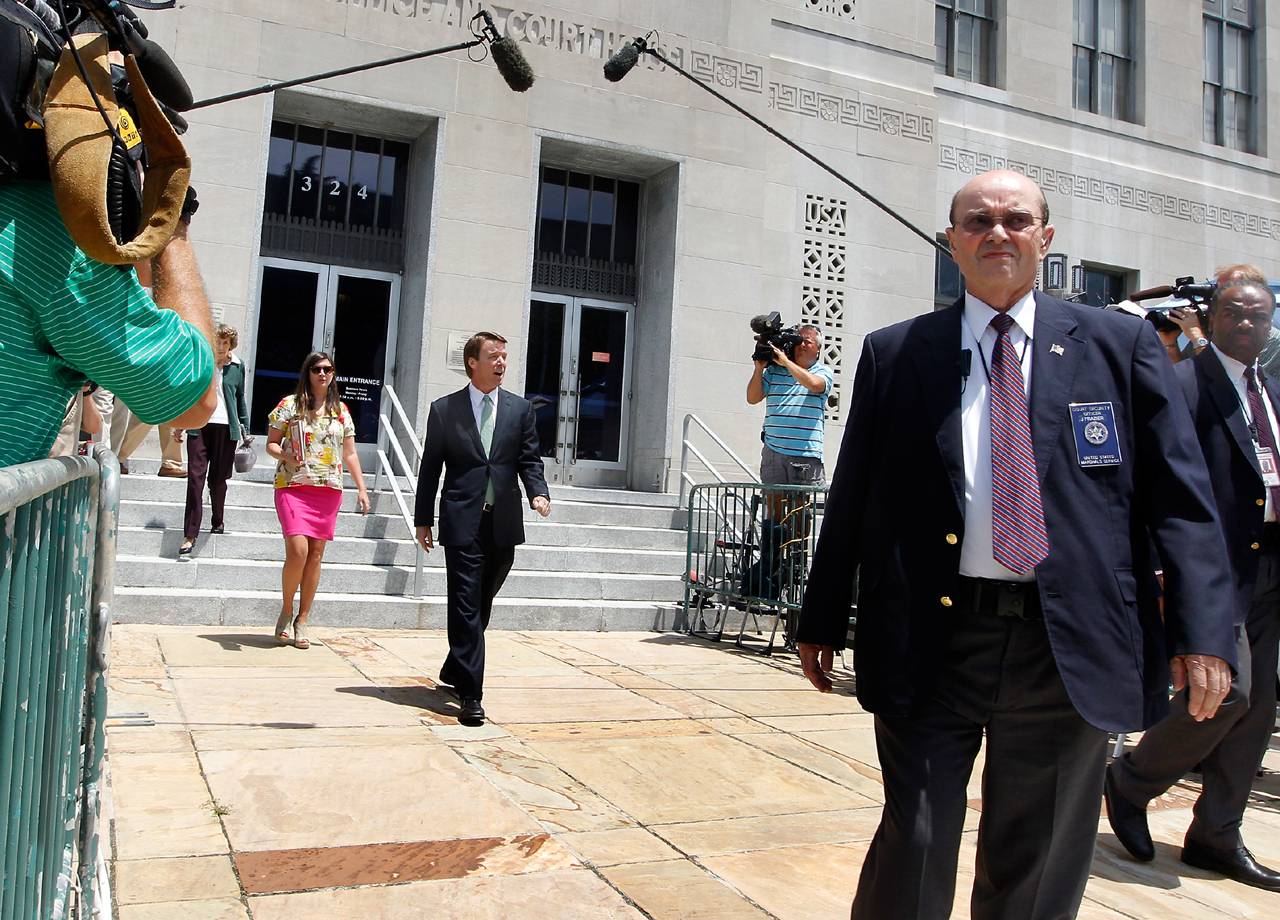 (CBS/AP) GREENSBORO, N.C. -- On Thursday, nearly a year after John Edwards was indicted in a federal court on charges of campaign finance violations, the case's presiding judge declared a mistrial on five of the six counts against him. Technically, Edwards could still face prison time and massive fines if convicted in a retrial. But it's more likely the former presidential hopeful will soon be able to put the years-long ordeal behind him.

According to a government source, the Department of Justice is "unlikely" to retry Edwards on the five of six counts on which the jury was deadlocked.

Given the lengthy, controversial and high-profile nature of the trial, prosecutors might be wary of retrying a case that many experts argued was questionable to begin with.

Presented with no damning evidence and no obvious victim beyond the public's trust, jurors said after the trial concluded they couldn't see their way to convicting the charismatic ex-candidate. On the one charge on which they were able to unanimously agree -- count three, which alleged that Edwards had accepted and received illegal campaign contributions in 2008 from Rachel "Bunny" Mellon -- Edwards was declared not guilty.

Kieran Shanahan, a former federal prosecutor and Raleigh defense attorney who attended the trial, said he thought the prosecutors took their best shot with what was ultimately a very weak case.

"They got their best witnesses, their best evidence and the judge ruled in their favor on all major evidentiary issues," Shanahan said. "In the end, the jury just didn't believe them."

Retrying the case would likely be costly, and could inspire even more accusations that the reasons for doing so were politically motivated - a notion Edwards' lawyers pushed from the start.

"With the track record that the government has had on politically related prosecutions - obviously the [notoriously bungled] Ted Stevens case comes to immediate mind - they have to evaluate those risks," said Elliot Berke, a partner at the law firm McGuire Woods and a co-chair of the firm's Political Law Group. "I think assessing the politics of this is not something you do on a partisan level. I think it's more the Department of Justice taking a look at public perception make certain that the public has confidence that they're serving justice."

The jury's refusal to convict John Edwards was less a redemption of the former White House hopeful than a rejection of the Justice Department's boldest attempt to make an example of someone in the name of enforcing campaign finance laws.

Thursday's verdict of not guilty on one count and a mistrial on five others bore out criticism from the earliest stages of the case that it was a reach, that prosecutors went after the ex-U.S. senator without the kind of evidence that justified the charges that he masterminded a scheme to use campaign donations to hide his pregnant mistress from the public and his terminally ill wife.

"As noted by nearly every campaign finance lawyer who considered the matter, this was a lousy case," said Melanie Sloan, executive director for the campaign finance watchdog group Citizens for Responsibility and Ethics in Washington. "All the salacious details prosecutors offered up to prove that Edwards is, indeed, despicable, were not enough to persuade the jury to convict him."

Several jurors said there just wasn't enough evidence. On network talk shows Friday, even jurors who thought Edwards was guilty on at least some counts said the prosecution wasn't able to prove it.

"We tried to put our feelings aside and what we were doing was just looking at the facts to come up with a verdict," juror Cindy Aquaro said on NBC's "Today" show.

Edwards faced six felony charges involving nearly $1 million provided by two wealthy political donors that was used to help hide the Democrat's mistress, Rielle Hunter, as he sought the White House in 2008. He faced a maximum sentence of up to 30 years in prison if convicted on all counts.

To convict Edwards, prosecutors needed to show not only that the candidate knew about the secret payments, which he denied, but that he knew he was violating federal law by accepting them. But the government was unable to produce any witness who said Edwards knowingly violated the law. Even former Edwards aide Andrew Young testified that Edwards told him he had consulted campaign finance lawyers who assured him the money was legal.

A former trial lawyer, Edwards was so unimpressed with the testimony against him that when the government rested, he turned to a member of his defense team and asked dismissively, "That's their case?"

When it was their turn, his lawyers presented just two days of evidence. Edwards elected not to take the stand in his own defense.

"This is a case that should define the difference between a wrong and a crime ... between a sin and a felony," Edwards' lead attorney Abbe Lowell told the jury during closing arguments. "John Edwards has confessed his sins. He will serve a life sentence for those."

Still, Steve Friedland, another former federal prosecutor who watched the case from inside the courtroom, predicted that Edwards could face a harsher verdict in the court of public opinion.

"Regardless of the decision, he still is Exhibit A for how we do not want our leaders to behave," said Friedland, now a professor at Elon University School of Law. "This is a huge victory for him, and big burden off his shoulders, but a hollow one given his astounding fall from grace."

The case against Edwards was tried by three prosecutors sent down from Washington and one prosecutor from Raleigh. They presented 14 days of testimony and evidence, with Young their star witness.

An aide once so loyal he falsely claimed paternity of Edwards' baby and helped hide his mistress from the media for nearly a year, Young turned against his former boss and testified for the prosecution under an immunity agreement. Though the government's case recounted how Edwards repeatedly lied about his affair to both the American people and his cancer-stricken wife, the defense countered by shredding Young's credibility on the witness stand and using financial records to show the former aide and his wife kept most of the money at issue in the case, funneling it into the construction of the couple's $1.6 million dream home.

Before Edwards' prosecution, no federal candidate had been tried over payments from a third party that flowed to a mistress. Sloan said the lack of resolution in the case will likely leave candidates and regulators confused about what is and is not a legitimate campaign expense.

"The U.S. criminal justice system requires fair notice of what is and is not against the law," Sloan said. "Sadly, the Justice Department seems to have forgotten this fundamental American precept. Luckily, the jury remembered."