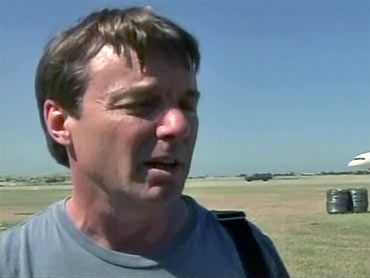 Former presidential candidate John Edwards, in the news today for his admission that he was the father of Rielle Hunter's daughter, is now in Haiti helping with earthquake relief efforts.

He said he had come with a group of 25 to 30 people, including doctors, and had brought supplies and medicine in an effort to "help in whatever way we can."

"We're going to do a variety of things, we're gonna get our intelligence, make sure we know where the medicine needs to go, which facilities can do the most good, where are other supplies – generators, food, water, water purifiers, where they can go and be distributed in the best way," Edwards said upon landing in the country. "And we're gonna figure out which places the physicians can provide the most help."

Watch CBS News Videos Online
"Once we do all that, we're also gonna go to some places, for example, some of the street schools that we've been involved with in the past, that we understand have been destroyed, to see what rebuilding needs to start," he continued.

A senior administration official told CBS News chief political consultant Marc Ambinder that Edwards, who visited Haiti a year ago, had informed the Obama White House that he wanted to go to Haiti and help out before the trip.

"I am told that this declaration was met with silence," Ambinder told CBSNews.com.

Asked about his admission of paternity, Edwards said, "I've said what I have to say for now and I'm here to help people."

Edwards' wife Elizabeth told the Charlotte Observer that "whatever the naysayers say is the truth is, John actually cares about poverty issues."

She said her husband had been working on such issues around the world since his presidential run ended.

"He's been doing work outside of this country where his errors in judgment don't have any bearing on work," she said.

What if John Edwards Were President?
Edwards: I Fathered Child out of Wedlock
John Edwards' Statement

Kevin Hechtkopf and Brian Montopoli contributed to this report.