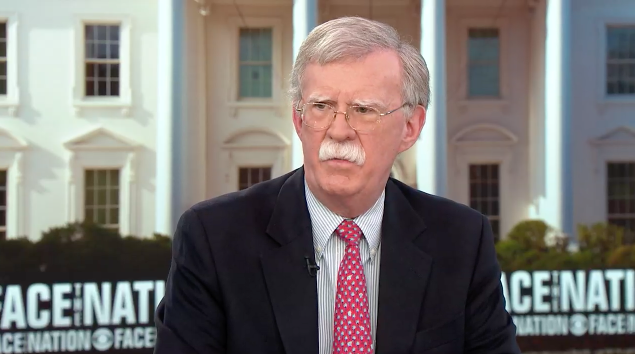 While meeting with Russian President Vladimir Putin and other top Russian officials in Moscow to set up a one-on-one meeting between Putin and President Trump, White House national security adviser John Bolton says Putin claimed the "Russian state" was not involved in efforts to meddle in the 2016 U.S. election or ongoing efforts to influence the November midterm elections.

Mr. Trump and Putin are set to meet in Helsinki on July 16 to "discuss relations between the United States and Russia and a range of national security issues," the White House said Thursday.

Appearing on "Face the Nation" on Sunday, Bolton said he raised the issue of election meddling directly with Putin during a meeting on Wednesday and expressed U.S. concerns about "what they're doing in the 2018 election."

"What President Putin said, through a translator, of course, but what he said was, there was no meddling in 2016 by the 'Russian state.' ... I think that's an interesting statement, I think it's worth pursuing. I'm sure the president will want to pursue it," said Bolton. "That's very different from saying, [in] my view, that there was no Russian meddling at all ... I think the president will have to pursue that further and I think that's one reason why he and President Putin need to have this conversation."

The Kremlin continues to claim that the Russian government played no role in the U.S. election but has left open the possibility that Russian non-state actors might have been involved. "It was stated clearly by our side that the Russian state hasn't interfered with the U.S. domestic politics, moreover hasn't interfered in the 2016 election," Putin aide Yuri Ushakov said after meetings with Bolton last week. This view has been rejected by the U.S., with intelligence agencies concluding in a 2017 assessment that the meddling effort was ordered by Putin himself.

In a press conference in Moscow, Bolton attempted to dispel concerns over the president meeting with Putin, whose government is at the center of ongoing probes into possible connections to the Trump campaign.

Bolton on Sunday said that the goal of the meeting is for the leaders "to have a chance sit down, not in the context of some larger multilateral meeting but just the two of them to go over what's on their mind about a whole range of issues," including ongoing tensions in Syria and Ukraine.

Dr. Deborah Birx on politics of the pandemic