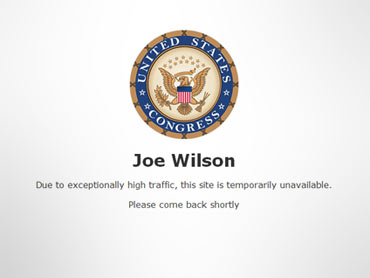 (CBS)
Rep. Joe Wilson (R-S.C.) has sent the Internet into a tizzy since interrupting President Obama's Wednesday night address to Congress, accusing the president of lying.

The congressman's Web site crashed due to exceptionally high traffic and asked visitors to "Please come back shortly."

While Democrats have used Wilson's outburst to raise money online for his electoral opponent, conservatives are taking to the Web to support Wilson's message. The conservative online publication the Palmetto Scoop and the conservative T-shirt company Made In Multiples are holding a contest to give away T-shirts that read "I'm With Joe Wilson! America's Congressman."

Meanwhile, a snarky Web site called JoeWilsonIsYourPreexistingCondition has popped up, with some pseudo-serious jabs at the congressman, such as "Joe Wilson yells while adults are talking," mixed in with ridiculous claims like, "Joe Wilson stole your newspaper." The Web site hurls insults at Wilson and provides a link to a fundraising page for his electoral opponent.

Wilson Outburst a Boon to Challenger