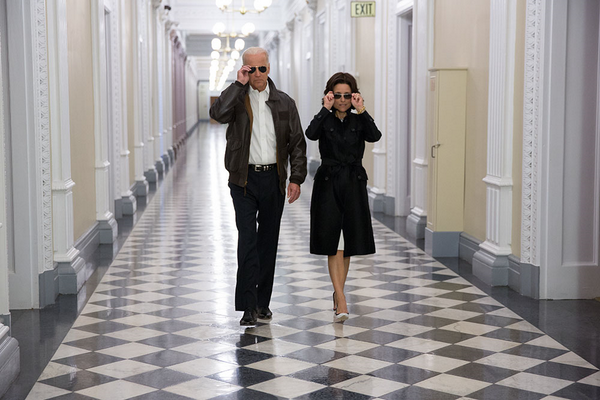 "Congrats @OfficialJLD. A fellow Veep with a great sense of humor, and a good friend. #Emmys," Biden wrote.

But the actress noted in her reply that Biden's note was actually a demotion.

"Actually I'm the president now. But thx!" Louis-Dreyfus wrote back, a nod to her character's sudden promotion to the Oval Office at the end of the show's most recent season, when the fictional president stepped down.

The two have formed a relationship over the course of the show. He called her to congratulate her on her first Emmy win for the show in 2012, and the two had lunch at the White House last April. During her visit, she recorded an installment for the Being Biden audio series, revealing that she surprised the vice president by sitting at his desk in the West Wing.

"So he thought he'd just ask my advice on some various briefs he had to deal with," she said in the audio clip, "And I was happy to give him my advice which he paid no attention to whatsoever. Which is why he's such a wise vice president."

The two also recorded a spoof video for the 2014 White House Correspondents dinner featuring the pair making trouble around town: sneaking into the Oval Office, getting reprimanded by first lady Michelle Obama for eating ice cream in the White House kitchen, and palling around with other notable political figures, like House Minority Leader Nancy Pelosi, D-California, who is in a tattoo parlor.