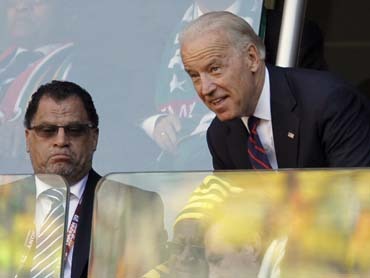 With domestic matters - chief among them the BP oil spill - keeping the president at home, Biden said today he was all too happy to step in.

"I am honored to be (here) representing the United States," Biden told the Associated Press.

He added: "The president is really angry. God love him, as my mother would say. He's dealing with [the] oil spill, and I'm here with you, and he had planned on coming."

Biden attended the game's opening ceremonies, which began at around 2:00 PM Eastern time. He was joined by other dignitaries like President Felipe Calderon of Mexico and Archbishop Desmond Tutu.

But Biden's visit to the region wasn't solely for soccer. The vice president said he hopes his trip will help strengthen relations with South Africa, according to the AP.

"I am especially grateful to be here in South Africa at a time when relations between our countries...have never been better," he said. "And the future promise exists to make them even stronger. President Obama is genuinely committed to building and expanding the partnership with the United States and South Africa."

Biden's arrival in South Africa came at the end of a week-long trip through Africa. The vice president visited Egypt and Kenya where he met with leaders to discuss, among other things, violence in Sudan and Somalia.