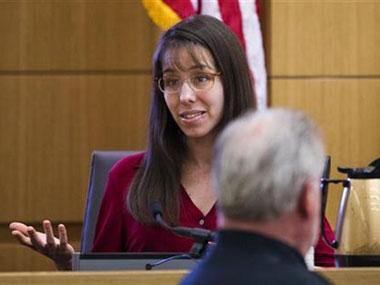 (CBS/AP) PHOENIX - Jurors in Jodi Arias' murder trial made it clear they aren't satisfied with her stories about why she killed her lover, then methodically covered her tracks and couldn't recall much of anything from the day.

Arias answered about 220 questions Wednesday and Thursday under an uncommon Arizona law that allows juries to quiz defendants through written questions read aloud by the judge -- and the bulk of the queries indicated that at least some jurors don't believe her.

WATCH: Why is Jodi Arias smiling in her mugshot?

The questions largely focused on Arias' contention that she has memory lapses during times of stress and cannot recall crucial details from the day of the killing, along with queries about why she never tried to help save the victim's life and repeatedly lied about her involvement.

Many questions were pointed in tone, and seemed to portray a jury struggling to come to grips with Arias' ever-changing version of events.

Arias is scheduled to resume testimony next Wednesday.

Throughout Arias' nearly three weeks of testimony, she has described her abusive childhood, cheating boyfriends, dead-end jobs, a raunchy sexual relationship with the victim and her contention that Travis Alexander had grown physically abusive in the months leading up to his death, once even choking her into unconsciousness.

Alexander's two sisters have sat in the gallery's front row each day, often shaking their heads in disbelief, rolling their eyes and crying softly, a box of tissues in front of them on a rail. Arias' family has shown little emotion, sitting largely stone-faced across the room.

Arias is charged with first-degree murder and faces the death penalty if convicted in Alexander's June 2008 killing in his suburban Phoenix home. Authorities say she planned the attack in a jealous rage, but Arias she killed him in was self-defense after Alexander attacked her following a day of sex.

Arizona is one of just a few states where jurors in criminal trials can ask questions of witnesses. In many other states, it's up to individual judges to decide whether it's permissible.

One juror question read aloud by the judge asked Arias why she spoke with television programs including"48 Hours." Arias replied that she wanted to "present a good image of Travis and a good image of myself."

"Why were you afraid of the consequences if you killed Travis in self-defense?" asked one juror in a question read by the judge.

"I believed it was not OK ... to take someone's life even if you were defending yourself," Arias replied softly.

Experts say the sheer number of juror questions and their context don't bode well for the defense.

"I think the message here is, 'I think you're lying and I want to have you answer my questions directly,'" Laboy said.

None of Arias' allegations of Alexander's violence and her claims that he had sexual desires for young boys have been corroborated by witnesses or evidence during the trial, and she has acknowledged lying repeatedly but insists she is telling the truth now.

At the conclusion of juror questions Thursday afternoon, Arias' defense attorney began to query her again over her responses. Both sides have the opportunity to question her, but only on specific points raised by jurors.

"Why should anybody believe you now?" defense attorney Kirk Nurmi asked Arias.

"I understand that there will always be questions, but all I can do at this point is say what happened to the best of my recollection. If I'm convicted than that's because of my own ..." she said, before prosecutor Juan Martinez objected and cut her off.

Martinez then began his own grilling, which will continue Wednesday.

Laboy said Arias has been on the witness stand long enough.

"Let Jodi's voice just end," he said. "Jurors may not be happy if they don't have the last word."

Alexander suffered nearly 30 knife wounds, had been shot in the head and had his throat slit before Arias dragged his body into his shower, where it was found by friends about five days later.

Arias has acknowledged that she then dumped the gun in the desert, got rid of her bloody clothes, and left the victim a voicemail on his mobile phone within hours of killing him in an attempt to avoid suspicion. She says she was too scared and ashamed to tell the truth.

She initially told authorities she had nothing to do with the killing then blamed it on masked intruders. Two years after her arrest, she said she'd killed him in self-defense.