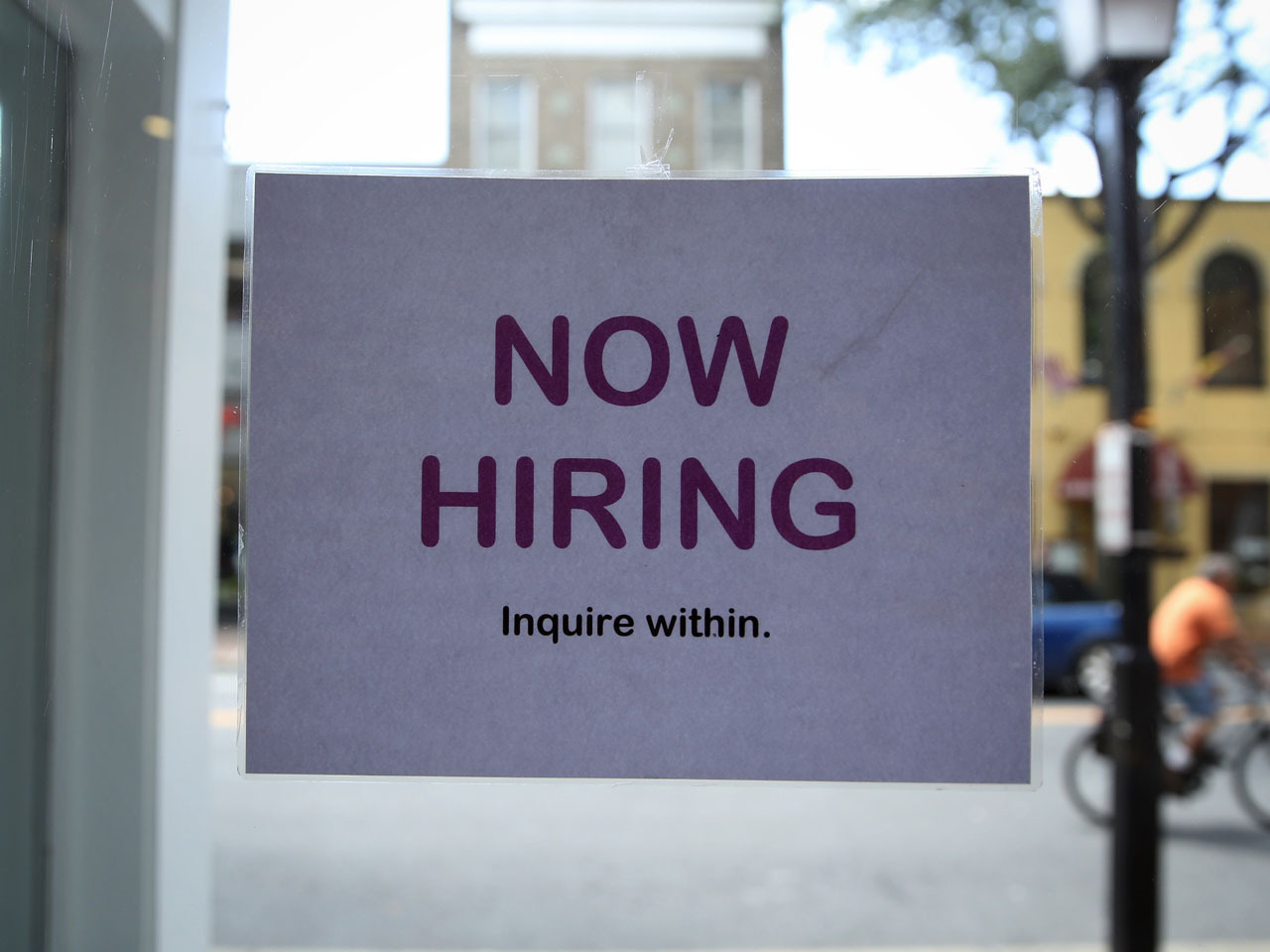 (MoneyWatch) A summer slowdown in the economy is setting back the pace of job-creation.

The economy missed consensus forecasts in adding 162,000 non-farm jobs last month, down from 188,000 in June, the U.S. Labor Department said Friday. The nation's unemployment rate edged down to 7.4 percent, from 7.6 percent in June and 8.1 percent a year ago. Unemployment declined mostly because the so-called household survey, which the government uses to calculate the jobless rate, showed that more people had jobs, while some stopped looking for work.

Payroll gains averaged roughly 195,000 jobs through the first six months of the year. Despite that surge, unemployment remains high amid what is the slowest economic recovery since World War II. Even as more people have entered the labor market, meanwhile, the number of adults who have a job also remains far lower than before the recession, which officially ended in mid-2009.

"In normal circumstances where the unemployment rate is 6 percent, 200,000 jobs would be a good number," said Gus Faucher, senior economist with PNC Financial Services Group, ahead of the government's latest job report. "But where we are now in the recovery the labor market is disappointing. At this pace it will still be another year or so until we get back to where we were in late 2007."

Overall, low-wage jobs accounted for more than half of all payroll gains. Employees also worked fewer hours per week, a sign that companies may not need to boost hiring. Workers' income fell 0.3 percent for the month, crimping their purchasing power.

"This falloff in hours, coupled with weak job growth in the temp sector, is not a good omen for future job growth," wrote economist Dean Baker of the Center on Budget and Policy Priorities, in a research brief.

Although economic growth for the April-to-June period topped analyst forecasts,it came in at only 1.7 percent. The Commerce Department on Wednesday lowered its readout on growth for the first three months of the year to a feeble 1.1 percent, down from an initial estimate of 1.8 percent. The agency also revised downward its previous assessments for the two previous quarters.

Most economists think economic activity will pick up in the second half of the year. Looking ahead to the third and fourth quarters, they expect the economy to shake off the effects of government spending cuts that took effect in March and of a January hike in taxes. Brightening prospects in the eurozone also should lift growth by driving U.S. exports.

The weak job growth last month is unlikely to forestall the Federal Reserve's plans to start scaling back its purchases of Treasury and mortgage bonds, according to some economists. The central bank implemented the policy, known as "quantitative easing," in 2008 to stimulate growth. But the tepid hiring will heighten attention on the government's job report in August. Another weak month of job growth could lead Fed officials to hold off in beginning to reduce its bond purchases.

The Fed said this week that the economy is likely to accelerate, but not as quickly as it had previously forecast. It also acknowledged that central bank officials' statements on when the Fed plans to taper its bond purchases had caused mortgage rates to rise. That could restrain growth by slowing the housing sector, whose ongoing rebound has been one of the main engines of the recovery.

Some experts are more pessimistic about economic growth over the rest of the year. Lance Roberts, chief economist at investment management firm StreetTalk Advisors, notes that GDP has grown at a rate of less than 2 percent, stall speed for the economy, for three straight quarters. Of particular concern is the recent slowdown in personal consumption, which accounts for nearly 70 percent of economic activity, he said.

That fear may be warranted. Although U.S. households have continued to spend this year even in the face of higher taxes and weak wage growth, consumption over the last three months has flagged, rising only 0.1 percent. If that trend continues, the economy would likely struggle to expand as fast as the government expects.

Roberts also raised concerns about the trend in recent years among employers to add more part-time than full-time workers. As of June, there were a record 28.1 million part-time employees, according to the U.S. Labor Department.

"We don't have strong enough economic growth to increase full-time employment," he said.

Other economists are more sanguine that the shift toward part-time labor is temporary, rather than a permanent structural shift in the job market. They say that full-time, higher paying jobs will return as the economy strengthens.

If experts agree on one thing, it's about what the economy doesn't need: another firefight in Washington over the federal debt ceiling, which must be raised by Oct. 1. A clash over the government's borrowing limit in 2011 dented consumer confidence, rattled business owners and spooked investors.

"It would be disastrous if Congress doesn't raise the debt limit," Faucher said, adding that interest rates would soar and throw the recovery into reverse. "It would be like telling financial markets that they can't trust the U.S. government to pay its debts."

Editor's note: CBS MoneyWatch initially published an Associated Press story on the employment report, which we have since replaced with this staff-written article. You can find the initial AP report and reader comments here.