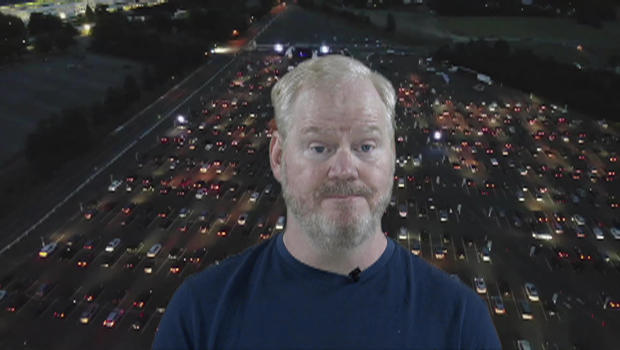 What's your job like now? The reason I ask is because this "CBS Sunday Morning" thing isn't my only job. Don't get me wrong – I love doing these segments! But like many of you, I have a couple jobs. Well, I HAD a couple jobs.

See, in addition to doing these things, I'm also a writer and an actor. Well, I WAS an actor. Then again, during the pandemic I have been acting like I'm NOT going crazy.

My main job, or my day job, is actually a night job. I am a standup comedian. For the past 30 years, 300 nights a year, I perform standup comedy. I've performed everywhere: clubs, bars, laundromats, theaters, arenas. I even performed at a rodeo, 'cause I have a good agent.

Then boom! COVID hits. Getting a group together during a highly contagious pandemic is not a good idea.

So, what's a comedian to do?

Can stand-up be performed virtually via Zoom? I suppose. But nothing beats the in-person experience.

Well, last Sunday in the parking lot of a horse track in New Jersey, I performed my first drive-in standup show

That's right; I performed standup comedy to close to a thousand cars! People were sitting inside their cars, or socially distanced on top of their roofs. Was it ideal? No. Were the laughs as loud? Definitely not. But it was a show.

And for a couple of hours, through my jokes and through the flicking lights and faint laughter and beeping horns, a community was built. Did that community look like a traffic jam? It sure did! But I'll take it.