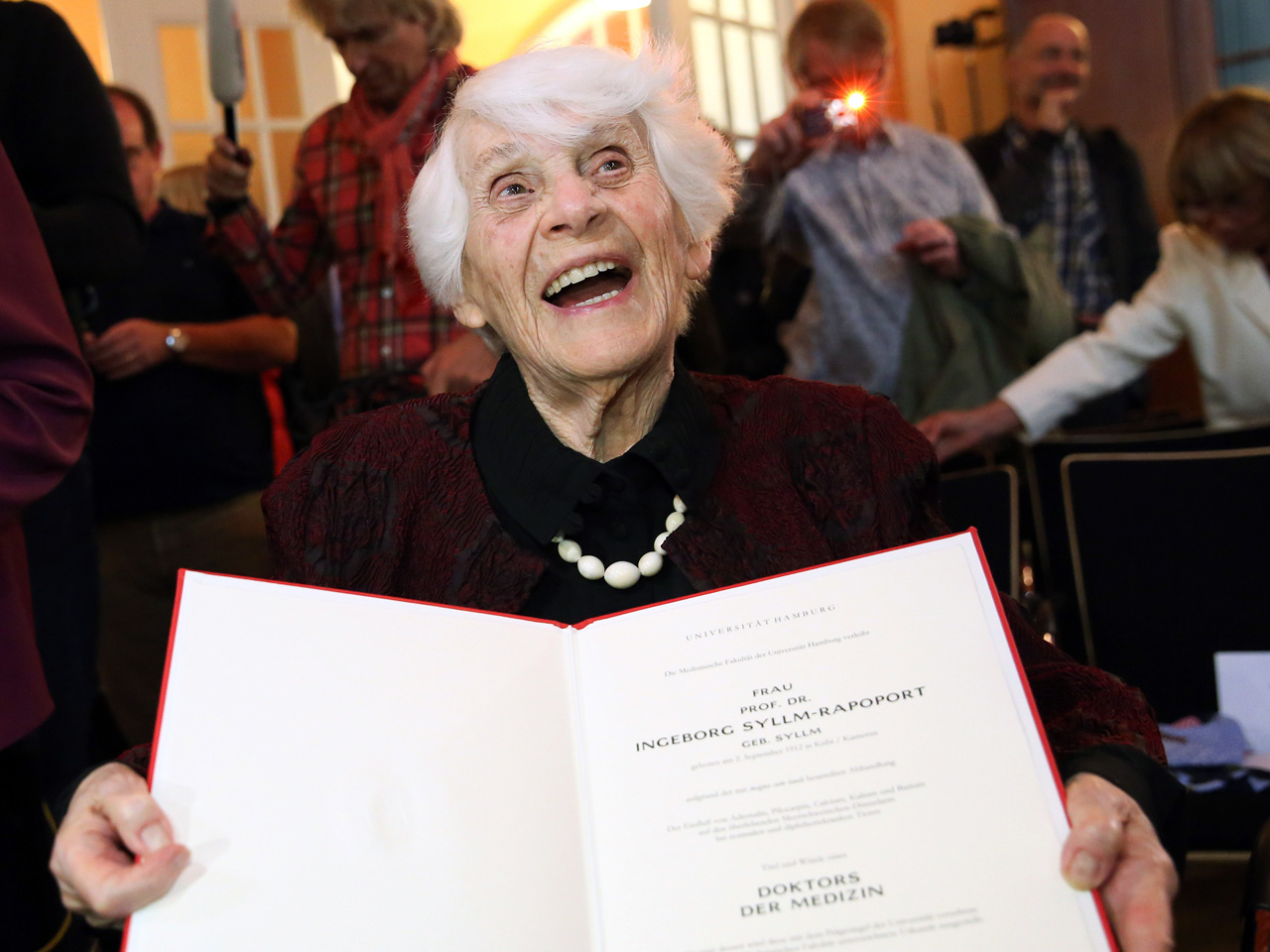 BERLIN - Ingeborg Syllm-Rapoport wasn't allowed to defend her doctoral thesis in 1938 under the Nazis because she was part-Jewish. Nearly eight decades later, she became Germany's oldest recipient of a doctorate at age 102 on Tuesday.

The neonatologist, a specialist in caring for newborns, cleared the final hurdle last month by passing an oral exam. She received her doctorate in a celebratory ceremony at the University of Hamburg.

"After almost 80 years, it was possible to restore some extent of justice," Burkhard Goeke, the medical director of the university's hospital, said in his speech. "We cannot undo injustices that have been committed, but our insights into the past shape our perspective for the future."

Syllm-Rapoport stressed in her acceptance speech that she went through all the efforts of getting the degree at her advanced age not for herself, but for all the others who suffered from injustice during the Third Reich.

"For me personally, the degree didn't mean anything, but to support the great goal of coming to terms with history - I wanted to be part of that," Syllm-Rapoport told German public television station NDR.

After the Nazis came to power in Germany in 1933, they gradually disenfranchised Jews, expelling them from universities, schools and many professions, before eventually deporting and killing them in death camps across Europe.

When Syllm-Rapoport handed in her doctorate thesis, her supervisor at the time, Rudolf Degkwitz, wrote in a letter in 1938 that he would have accepted her work on diphtheria if it hadn't been for the Nazis' race laws which, he said, "make it impossible to allow Miss Syllm's admission for the doctorate."

Syllm-Rapoport emigrated to the United States in 1938 without a degree. After applying to several American universities, she eventually finished her degree in Philadelphia and worked as a pediatrician, before moving with her husband, a socialist like herself, to East Berlin in 1952. The mother of four was the first head of the neonatology department at Berlin's Charite hospital.

Asked about how Syllm-Rapoport did in her oral exam last month - which was on the topic of diphtheria, just like her original Ph.D. thesis - Uwe Koch-Gromus, the university's dean of the medical faculty said, "She was brilliant, and not only for her age."

"We were impressed with her intellectual alertness, and left speechless by her expertise - also with regard to modern medicine," Koch-Gromus said.