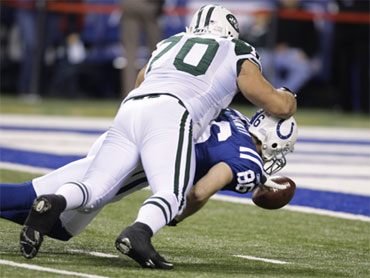 Coach Jim Caldwell pulled Peyton Manning and a handful of other starters for the previously unbeaten Colts in the third quarter, and the Jets took advantage by rallying for a 29-15 victory that ended the NFL's longest regular-season winning streak at 23 games.

With Manning on the sideline, helmet on and standing next to his offensive coordinator, the Colts (14-1) lost for the first time since Oct. 27, 2008, at Tennessee, ending a franchise-record 13-game winning streak at home.

The Jets (8-7) took control of their playoff destiny with the victory, and would make the postseason for the first time since 2006 with a win next week at home against AFC North champion Cincinnati.

Caldwell made the move to sit Manning & Co. after taking a 15-10 lead with 5:36 left in the third quarter, focused on a Super Bowl run rather than regular-season perfection. But to the fans at Lucas Oil Stadium, who wanted to send players to Buffalo with a chance to match New England's perfect 2007 regular season, it clearly mattered.

"Indianapolis earned the right to do whatever they want," Jets coach Rex Ryan said. "That's a heck of a football team. We were just going to line up and play, one way or the other. Whoever was in a Colts uniform was who we were going to play against."

"While the Jets' win today ended Indianapolis' streak and showed once again how difficult it is to go undefeated, I want to congratulate the Colts on a great run," Shula said. "Peyton Manning proved once again this season why he is one of the best quarterbacks in the history of the NFL and it was certainly no surprise to see him lead the Colts to an NFL-record 23 straight victories."

On the second series the starters sat out, fans started booing. The boos grew louder with each play, reaching a crescendo when Manning's replacement, Curtis Painter, was hit by Calvin Pace while setting to throw and lost the ball. Jets defensive end Marques Douglas fell on it and rolled into the end zone for the go-ahead score with 1:29 left in the third quarter.

"It was an unfortunate situation, he hit me right at the right time to force the fumble," said Painter, who added that the booing didn't bother him.

With Manning, Reggie Wayne, Dallas Clark and Joseph Addai out, that was all the Jets needed to take over.

New York sealed it with two fourth-quarter scores - a 43-yard field goal from Jay Feely and a 1-yard TD run from Thomas Jones.

As the clock wound down, some fans were silent and many left. Those who stayed booed as players shook hands, an odd way to end the record-setting 23-game streak.

"I'm disappointed," Manning said. "There were some chances, I think, to do some things better out there. The turnover and the kickoff return, those are plays that we haven't given up this year and when you do, it's hard to win. So we've got some things to get corrected and that will be the plan starting tomorrow."

The Colts' downfall began at the start of the second half when Brad Smith fielded Pat McAfee's kick 6 yards into the end zone, ran it out, found a seam along the right side and then raced down the sidelines. He even managed to stay in bounds after getting hit at about the Colts 20, going 106 yards to give the Jets a 10-9 lead.

It was the longest return in Jets history and tied for the second-longest win NFL history with three others. Only Ellis Hobbs' 108-yard kickoff return against the Jets in 2007 was longer.

But the Colts came right back. They moved 81 yards, the last coming when Donald Brown bounced off two Jets defenders and scooted into the end zone to make it 15-10 with 10:13 left in the third quarter. Brown's conversion run failed.

Then the Colts key offensive starters all left and New York pounced.

Painter lost the ball on first-and-10 from his own 20 and when Douglas recovered it for the score, the Jets had the lead. Mark Sanchez then hooked up with Dustin Keller on a 2-point conversion to make it 18-15.

And suddenly, the Colts winning streak was in jeopardy.

"It was the plan, the organizational philosophy that we were going with," Manning said, "and, as players, we support that."