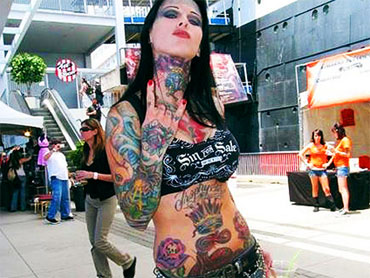 Who would rule the runway in a Zoolander-esque tattoo walk-off between Jesse James' alleged mistresses Michelle "Bombshell" McGee, Melissa Smith and his ex-wife Janine Lindemulder? If you ask celeb stylist and reality TV star Robert Verdi, the answer is neither. "Tattoos are hard to call fashion," explains Verdi. "Fashion is ever-changing, and tattoos are permanent, so they are inherently unfashionable."

Yet the fashion industry doesn't frown on tattoos. French-Canadian model Eve Salvail catapulted to fame in the 90s when the dragon on her scalp caught the eye of Jean-Paul Gaultier; Rodarte designers Kate and Laura Mulleavy covered models in tattoo-inspired body paint for their Spring 2010 show; and fashion editors don't bat a painted eyelash when inked models hit catwalks in couture. The taboo of tattoos is long gone. However, there is an indelible line that can easily be crossed, taking ink-bearers from fashionable to freakish.

"To a certain extent, tats are no different from permanent hair dye or a boob job. They're designed to enhance your natural appearance," says Polly Blitzer, beauty expert and founder of BeautyBlitz.com. "But all-over ink is a counter-culture statement, and covering yourself in ink says 'notice these, not me,' which is a red flag that there are deeper insecurity issues."

And notice these women we do, for better or for worse.

However if winning the walk-off were based on ink quantity and controversy, tattoo model McGee - needled from her eyes to her armpits -- would surely take the prize, boasting more tattoos than even the gossip mongers can count.

"I love the artistry of tattoos," Verdi admits, "But a woman's body is curvy and fluid, and I've always felt that tattoos often take away from the natural beauty of the female form."

Whether you see tattoos as art or armor, fashion or fetish, at what point does a stylized statement of individuality -- a one-of-a-kind accessory - become something entirely different? James himself, proud owner of more than 30 tattoos, has "Pay Up Sucker" inscribed on his right palm - permanent words that suddenly have new meaning.