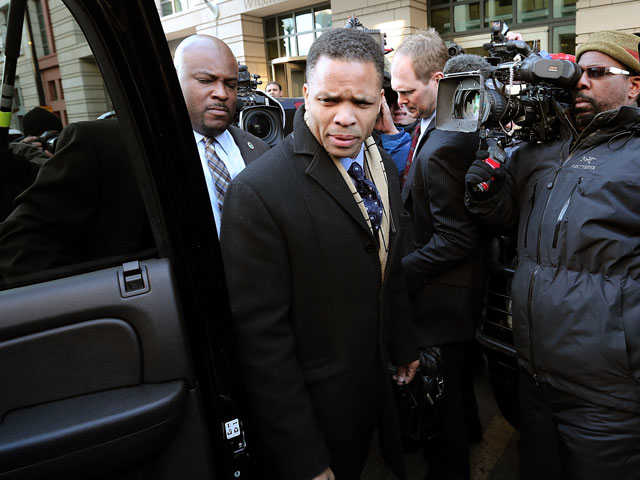 Former Rep. Jesse Jackson Jr., D-Ill, who over the past several years has become embroiled in scandal, says that if he and his wife both have to go to jail, he'd like to serve his time first, according to the Chicago Sun-Times.

Jackson, whose father is the civil rights leader and former presidential candidate Rev. Jesse Jackson, pleaded guilty last year of using $750,000 worth of campaign funds for personal use. His wife, Sandi Jackson, also pleaded guilty to filing false tax returns and failing to report the campaign money as income. The couple is to be sentenced on July 3.

Federal prosecutors are seeking a prison sentence of 48 months for Jackson Jr., according to Reuters, and 18 months for Sandi Jackson. They had requested that Sandi Jackson serve her sentence first because the couple has two children.

But Jackson Jr. is requesting that those orders be flipped, according to the Sun-Times, which cites a statement from his lawyers positing that "Mr. Jackson's health issues preclude him from working at this time."

"If he serves his period of incarceration first, Mrs. Jackson would be able to work and could stabilize the family's finances," the lawyers said. "By the time Mr. Jackson completes his sentence, the family would not be in the significant financial peril it is in today. ....the strain of waiting to begin serving his sentence would not be beneficial to Mr. Jackson's state of mind or mental health."

Lawyers for the Jacksons say that the couple is now broke.

Last summer, the Mayo Clinic in Rochester, Minn., announced that Jackson Jr. had received an "extensive evaluation" and was undergoing treatment there for Bipolar II depression.

His lawyers sought a shortened sentence for him due to his bipolar disorder, but prosecutors disputed the sufficiency of the evidence his lawyers provided, describing it as "three-and-a-half pages of letters" that were "surprisingly bereft of detail about why the relief is warranted," according to the Sun-Times.

They also sought a more lenient sentence under the auspices that he might not be able to form a "trusting relationship" with a psychiatrist in prison, but again, his requests were dismissed.