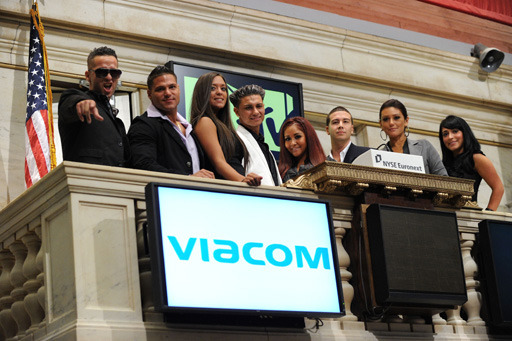 NEW YORK (CBS/AP) The cast of "Jersey Shore" brought a little "GTL" to the NYSE on Tuesday.

All eight cast members of the hit MTV reality show made their way to Wall Street to kick off trading at New York Stock Exchange in Manhattan.

Nicole "Snooki" Polizzi gave a thumbs up to stock brokers before ringing the bell and waving to the crowd. Fellow cast members Paul DelVecchio, Mike "The Situtation" Sorrentino and Vinny Guadagnino pumped their fists in the air as the rest of the group applauded.

Fans of the show are gearing up for the premiere of the second season, which was filmed in Miami. Despite the new location, the show will continue to showcase the eight over-the-top personalities as they juggle love, friendship, partying, work, and of course, gym, tan and laundry.