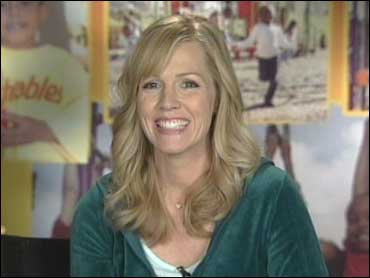 When actress Jenni Garth was a child, she wasn't completely a girly-girl.

"I was a tomboy," she told The ShowBuzz, "but I was still always really feminine. I loved horses and animals; riding my bike outside. I did a lot of playing outside, which is something I think kids today are lacking."

Garth, who has three children of her own, says it's important for kids to have a place to play outside. That's why she's teaming up with the non-profit organization KaBOOM! to help build playgrounds around the country.

"Yesterday I took two of my daughters to South Los Angeles, and in the morning when we started there was just a big empty open field in the back of this apartment building," she said. "By the end of the day, there was this awesome fun playground for kids to play in that is safe and protected and their parents can watch them play."

Kraft is helping to support the program and giving a chance for kids to participate.

"Your kids can make a difference by going to Lunchables.com and voting for their favorite piece of playground equipment," she said. "Essentially, your kids get to design these playgrounds that are going to be built all across the country. For every vote online, Lunchables is going to be donating 25 cents towards the $400,000 needed to build these six playgrounds."

Garth gets plenty of playground time chasing after her children, Luca Bella, 10, Lola, 4 1/2, and 11-month-old Fiona. "I run through the tunnels, the whole everything," she said.

The former star of "Beverly Hills 90210" and "What I Like About You" is going to need all that exercise to build her stamina for her shot as a contestant on "Dancing With The Stars" which premieres Sept. 24 on ABC.

"It's really rigorous; it's a really hard sport," she said. "I have to call it a sport because I sweat and I've got blisters. It's intense!"

Garth has had a lifelong affection for dance.

"When I was like 12, 11, I studied ballet, tap and jazz," she said. "I thought I would grow up to be a dance teacher. Then I started acting and I stopped dancing. That was a long time ago, though!"

Former "90210" co-star Ian Ziering, who was a contestant on last year's show, was one of the people who encouraged Garth.

"We've been text messaging each other. He said it would be a good opportunity for me," she said. "My husband, Peter, and my daughter Luca both really encouraged me and said 'why not?' All I can do is fall down on national television."

Garth said she's found a balance in her life between her career, her husband and children, and her charity work. Even though she achieved TV stardom as a teenager, she said that her family was able to keep her grounded.

"For me personally, my experience growing up was that of a very strong family," she said. "We sat down to dinner together every night. We were never wealthy, and we didn't have a crazy lifestyle. I had a very normal, sort of idyllic childhood. For me that's the backbone of who I really am, I'm just a normal person. That's how I live my life and that's how I raise my family. I just strive to be a good wife and a good mother and good at what I do as a professional. I have it instilled in me from my parents."
It's a lesson a few young Hollywood stars might benefit from.

"I can't put myself in their shoes, because I don't know their story, I don't know what got them to where they are right now," she said. "I hate to give advice, especially unsolicited. I just wish that everyone could just get in touch with what's really important in life and take all the stuff that really doesn't matter at the end of the day out of the equation."

What matters to her most is doing the kind of work she's been doing with KaBOOM!

"It enhances me as a human being and as a parent," she said. "It makes me feel like I'm making a difference. What I do is entertain and it provides some sort of relief to people, whether it's laughing or crying. But when I know that I'm making a difference in people's lives or getting the word out to people on how they can make a difference in people's lives it makes me feel like I'm doing what I'm supposed to be doing here."