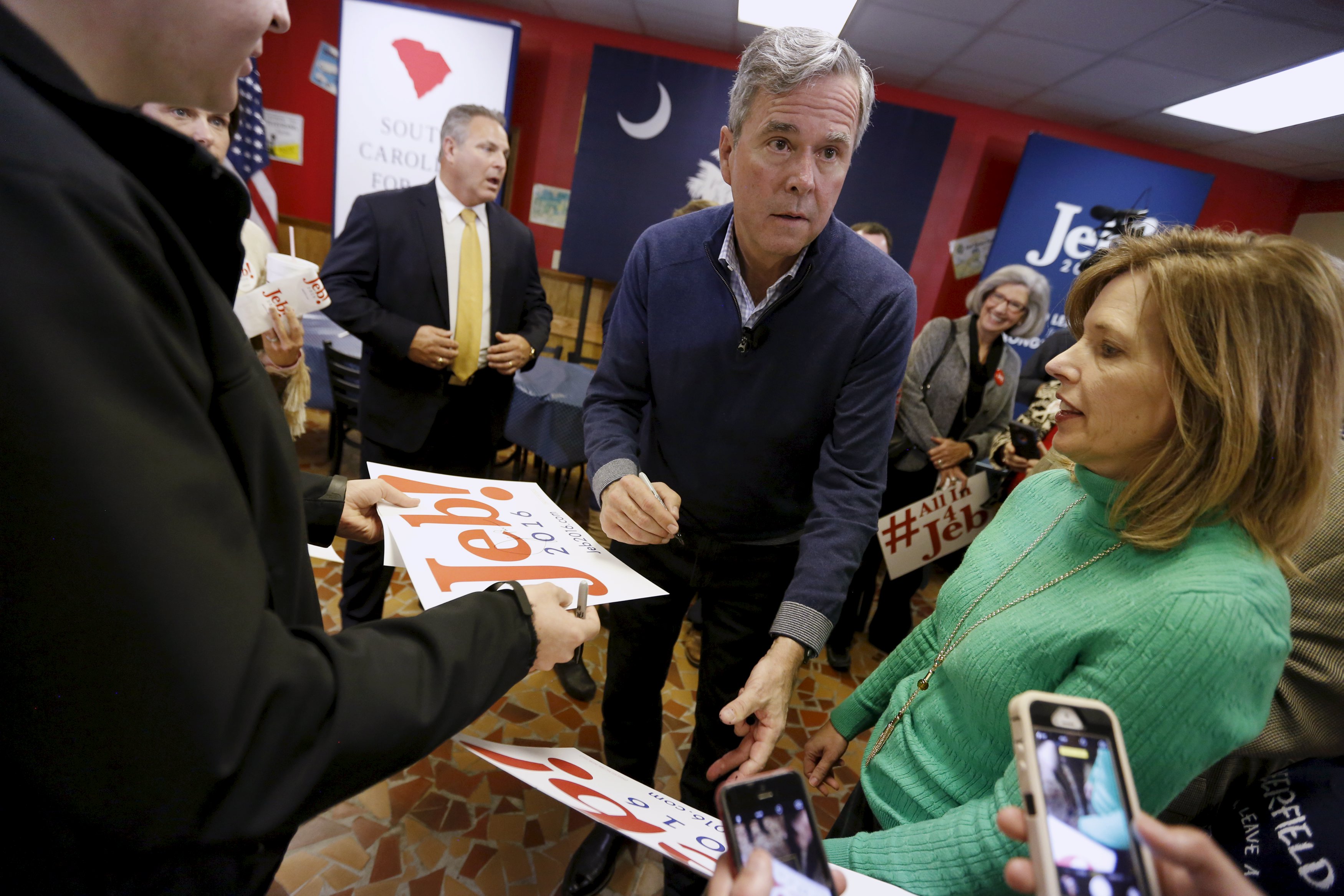 "She's a very good governor and should I win the nomination, there'll be a role for her in the campaign," Bush told reporters.

Then, at his own town hall event at a Charleston-area club, he got more unsolicited advice - mostly about how to handle front runner Donald Trump - than policy questions.

Take the high road. Be more like brother George, the former president. "You could raise the bar," said Edward Scott, of Frederick, Maryland.

"I don't think your message is resonating," Scott told Bush in front of about 300 people. "It appears that you do get knocked off center, as anyone would."

Once, when his microphone stopped working, he told an audience member that had complained about being unable to hear the candidate, "I can't do anything about it."

"I've got to keep on talking," Bush snapped.

It was all about front runner Donald Trump, the race's taunter-in-chief, who has relentlessly called Bush "weak" and generally dominated the race.

Bush has responded by dealing head-on with Trump.

On Wednesday, Bush called Trump "a bully" best dealt with by a "punch back in the nose."

The candidate also blamed a Trump-centric media for the billionaire's success in the primary race.

"The press is totally at the mercy of Donald Trump," Bush said.

But the debate over how to handle Trump comes just three days before the primary in South Carolina, where Bush's brother and father both won big victories in 2000 and 1998. Bush is driving to show momentum in the South Carolina primary if he wants to be a viable candidate heading into the March 1 Tuesday voting, when 13 states hold nominating contests.

At one point during Wednesday's event, Bush mimicked pundits suggesting the race is over.

"It's all decided, we don't have to go vote I guess, it's all finished," Bush told the crowd in remarks circulated by rival campaigns. "I should stop campaigning maybe, huh? It's all done. That's not how democracy works."

The criticism bled into the crowd.

Republican voter David Villinger suggested to Bush that the feud with Trump was beneath the son and brother of former presidents.

"I think the campaign has been co-opted by the P.T. Barnum of our time," Villinger told Bush, referring to Trump. "And I think he is getting you off your message - your good message."

Bush defended his approach, saying "This is what I do. This is called campaigning right now."

"I will not take a step back for a guy that's like he is. Never," Bush said, prompting applause from the group.

A retired military serviceman capped the questioning by asking Bush: "I like your brother (George). Can you be - excuse me for saying in the vernacular - a son-of-a-bitch?"

The candidate has also seen another roadblock on the campaign trail: his once-protégé Florida Sen. Marco Rubio.

Bush's strategy on dealing with his newfound challenger emerged Wednesday when he simply dismissed the the Florida Republican's supposed accomplishments in the Senate.

"It's hard for me to be lectured by a gifted young guy who thinks going to a committee hearing means you think you know something about the world," Bush said in Summerville.

Earlier in the day, at his first town hall in Beaufort, Bush also slammed Rubio's lack of foreign policy experience.

"For someone who has no experience at all to suggest I don't -- having lived overseas, having worked overseas, developing relationships with leaders overseas, being governor of the fourth-largest state and being a commander in chief of the Florida National Guard," he said. "With all due respect, Sen. Rubio, your four years or five years, or whatever it is as senator, does not match up to my capabilities of understanding how the world works."