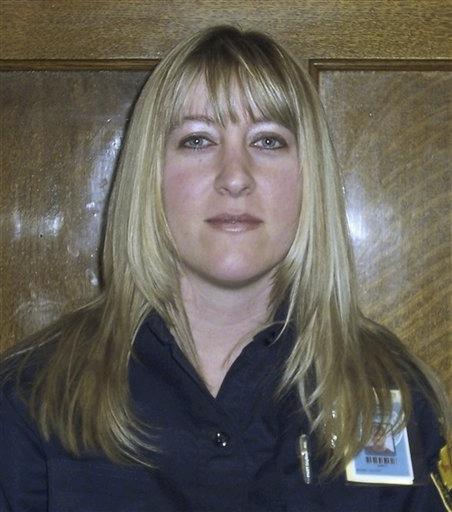 (CBS/AP) Jayme Biendl, a Washington state corrections officer, was found dead Saturday, strangled with a microphone cord in the prison chapel, where she led religious programs, and an inmate is the prime suspect, authorities say.

The 34-year-old, who had raised concerns about being the sole guard in the chapel, was found dead Saturday night at Monroe Correctional Complex about 30 miles northeast of Seattle, Department of Corrections spokesman Chad Lewis said.

He said it was the first time a guard has been killed at the 100-year-old facility.

Deputy Prisons Director Dan Pacholke says Biendl was carrying a two-way radio with a silent alarm, but it's not known whether she had tried to contact other officers. He says that will be among questions investigators will try to answer as they review prison procedures.

Corrections officers and supporters gathered Sunday night at the entrance to the prison for a candlelight vigil in Biendl's memory.

Byron Scherf, a 52-year-old inmate, was reported missing during a routine count at 9:14 p.m. Saturday. He was found three minutes later in the chapel lobby and told officers he had planned to escape.

Scherf is serving a life sentence without parole after being convicted of first-degree rape and kidnapping in 1997 under the state's "three-strikes" law, Lewis said.

Prison officials said Scherf had been serving as a volunteer worker in the chapel.

Lewis said Biendl was alone at the chapel Saturday night and was not carrying a weapon, as is typical for many corrections officers.

She was ending her shift at 10 p.m. but had not reported back or turned in her equipment, which sparked concerns. Staff members immediately went to the chapel and found her unresponsive.

Biendl joined the Corrections Department in 2002. Teamsters 117 spokeswoman Tracey Thompson said Sunday that the officer had complained to her union shop steward and prison supervisors about being the sole guard working in the chapel. She worried about being there alone without anyone checking on her, Thompson said.

Recent budget cuts have forced staffing reductions and union members have been worried about the impact of those reductions on safety, Thompson said.

Lewis insisted that Biendl's death was not a result of budget cuts in recent years. "The staffing model has been the same for years," he said, adding that the reality is that officers often work by themselves.

Scherf entered the prison as a maximum-security offender, but through good behavior was transferred into the medium-security unit, Lewis said. Until Saturday, he had not had a violent infraction since 2001, when he tried to kill himself, Lewis said.

He was being housed in a medium-security unit at the Monroe complex, the state's largest prison with about 2,500 inmates and five units with varying security levels.

Scherf was being held in solitary confinement and the Monroe facility was in lockdown Sunday while detectives continued to investigate.