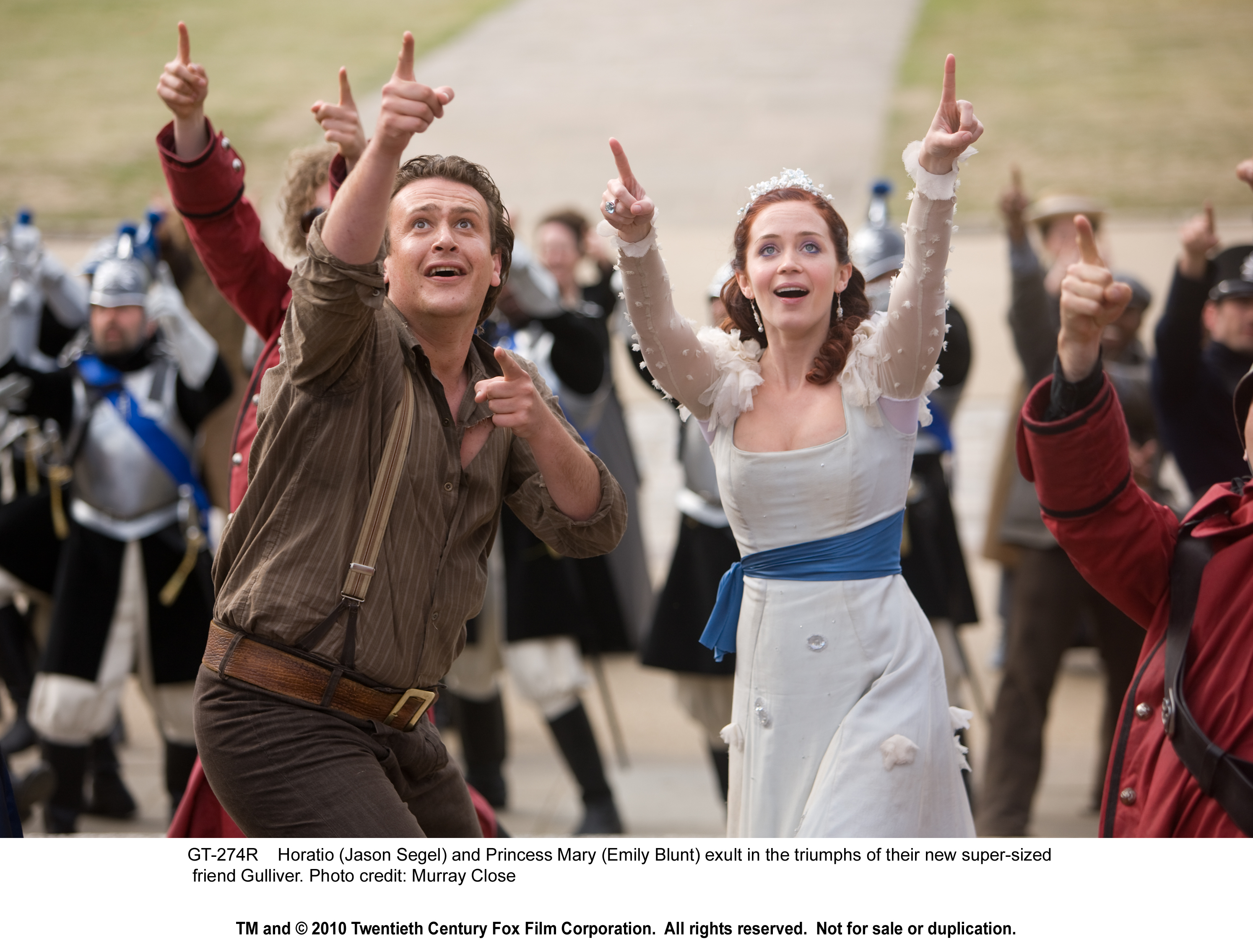 (CBS) Just in time for the holidays, Jack Black stars in an adaptation of Jonathan Swift's 18th-century classic, "Gulliver's Travels," with a contemporary spin added to the source material.

One of his co-stars, Jason Segel (of "Forgetting Sarah Marshall" and CBS' "How I Met Your Mother" fame) recently spoke to CBSNews.com about this new family-friendly film, dropped details about his starring-role in the new "Muppets" movie (due in late 2011) and talked about his next collaboration with Judd Apatow.

CBS News: In "Gulliver's Travels," Jack Black is huge.  Your neck must have hurt from having to look up in the sky at him.

Jason Segel: Yeah, there is a lot of looking up, but luckily I am the same size as everyone in Lilliput [the miniature-sized region in which Gulliver finds himself], so Jack had to do a lot more looking down than I had to do looking up. But I did do a fair amount of looking up.

CBS: Since Jack Black is huge and you are tiny, how did you film those scenes together?

JS: We shot most of the scenes separately. On separate soundstages at separate times. But we would always go and be there for each other off-camera. So we did act quite a bit together, just not necessarily on-camera. But there are a couple scenes where they invented a special rig called the dual-Moco Roco. A dual motion-controlled remote control camera...that's the real name. So we were on separate sound stages doing the same things at the same time with two cameras moving at different times. So we could just hear each other.

JS: Yeah, it was pretty cool.

CBS: Tell us a little bit about your character [in "Gulliver's Travels"], Horatio. What is he like? Where did he come from?

JS: Well, Horatio basically is a really, really sweet commoner who is imprisoned in Lilliput for flirting with the Princess...Princess Mary played by Emily Blunt. The Lilliputians, by nature, are a bit naive and very trusting. And so that part was easy, then you just do this face. This is a naive innocent face [intimates a quizzical facial gesture]. Then I added whenever I had to deal with the Princess, which separately is this face [another facial gesture], so then I put them together and I got basically this face [final sad-faced gesture.]

CBS: Did you read "Gulliver's Travels" at all before this?

JS: I read the Cliffs Notes in junior high, I think that's the best I can say. Then once I got the part, of course, I read it over and over and over again. [He's joking.]

CBS: This is one of your first PG-rated starring movies?

JS: Yeah, and "Dispacable Me." This is my second family film. And, "The Muppets," which comes out next year, will also be PG. So, I'm riding the family wave for a minute.

CBS: Do you like that? Kind of transitioning from more adult humor to---

CBS: You've focused a great deal on comedic roles in the past. Are you going to eventually transition to more dramatic performances?

JS: Yeah, well I'd like to. Like I said, I just want to keep things mixed up. I do one next year called "Jeff Who Lives At Home" like I said which has Susan Sarandon and Ed Helms, which has a fair amount of drama in it. So it's sort of a good mid-way between comedy and drama.

CBS: So, with the Muppet movie, you have two movies coming out next year?

JS: Actually, I've got three. "Jeff Who Lives At Home," another movie called "Bad Teacher," and the Muppet movie, which will come out on Thanksgiving.

CBS: "The Muppets" is going to be little or no CGI, as in traditional Jim Hensen-style?

CBS: And who do you play in that?

JS: I play a human, along with Amy Adams, who plays my girlfriend. And Academy-Award winner Chris Copper plays the villain. Pretty serious.

CBS: Going back to "Gulliver's Travels," now this isn't just a film for kids, there's a lot of adult humor in it?

JS: Yeah, there is. It's a film for the whole family. Which is, for me, the hallmark of a really good family film. That everyone can go and the kids are entertained, the parents aren't sitting there like its Barney the Dinosaur and having to roll their eyes while their kids have a laugh. Everyone in the family will find something to enjoy. It brings families together, it's pretty good.

CBS: How did you like living in London while filming "Gulliver's Travels?"

JS: I loved it. I had lived there before. I wrote the first draft of "Muppets" while living in London so I had a built-in group of friends there, so it was just perfect.

CBS: What do you enjoy more? Writing or acting? Or both?

JS: I like generating my own material. I like seeing something from concept to finished product when I have a hand in it. That's what I like most.

CBS: Did you have a writing hand in Gulliver's Travels?

CBS: Did you improv at all?

JS: Yeah, there is a fair amount of improv, but it was a little tricky because we were shooting separately on separate sound stages so we had to match whatever the first person did. So by the time it came to your turn...But, we found room to improv a little bit.

CBS: And how do you think fans of the source material will respond to this film?

JS: Well, it's certainly a modern adaptation of a classic story. But I think it's very much like Shakespeare. Great writing transcends time and can be adapted to any sort of environment. And I think that's what we've done here.

CBS: What about the 3D element, how do you think that will play?

JS: I just saw the movie for the first time on Saturday, and it was awesome. The 3D was really cool. We didn't know it was going to be 3D until after the fact. They did that in [post-production]. But it's fantastic.

CBS: If this does well, do you think there will be a sequel?

JS: Oh, interesting. Well...we really only did like one and a half chapters--one and half books-of the four-book Gulliver's. I wouldn't mind "Gullivers' Travels 2: Horatio's Tale"

CBS: You never know, right? Is Horatio a character in the original books?

JS: [Throws his hands up in the air as if he has no idea how to answer that.]

CBS: What about Judd Apatow? Are you guys going to work together again?

JS: Yeah, we're going to work on something next year. Nick Stoller, my writing partner who also directed "Forgetting Sarah Marshall" will direct it. It's called the "Five Year Engagement" and Judd Apatow will produce.

CBS: But, will there ever be a direct sequel?

JS: No, I don't think so, we've put those characters behind.