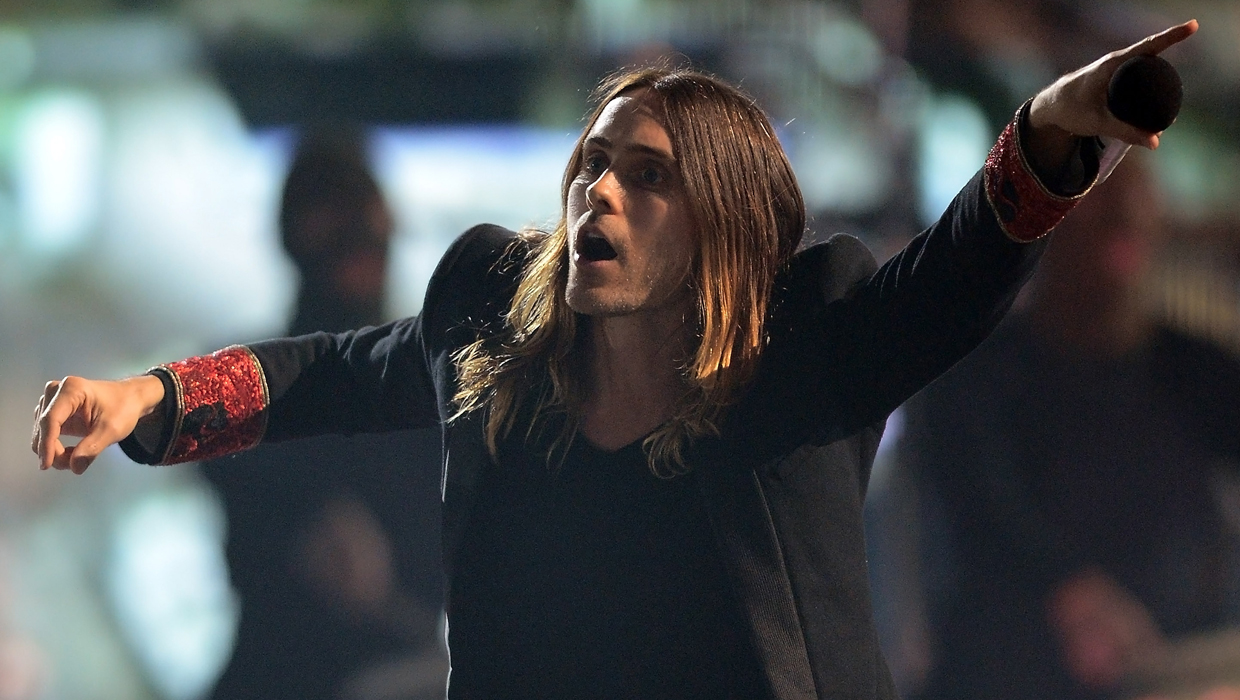 Jared Leto may be getting a lot of buzz for his "Dallas Buyers Club" acting performance, but looking ahead to the rest of 2014, his life will largely revolve around music.

Leto spent much of 2013 on the road and as the new year gets under way, he's expecting a lot more touring with his band, Thirty Seconds to Mars. The group has a worldwide tour lined up with visits to Asia, Australia and Europe on the itinerary.

Leto says Thirty Seconds to Mars experienced its most successful year yet, noting how the band, which also features Leto's brother Shannon Leto and Tomo Milicevic, played its biggest shows ever.

"I think it's an amazing thing because you have the opportunity to continue making art -- making music, sharing that with people on tour," Leto, 42, told CBS News. "I suppose every time you make an album or go onstage you are sharing a piece of yourself, sharing a piece of your work. It's the thing about music that's really special -- it's a community-oriented experience. It's a really social experience and that's a nice thing."

Thirty Seconds to Mars has been on tour behind its fourth studio album, "Love Lust Faith + Dreams," released last March on Virgin Records. "I think we set out to redefine, rediscover start again in new way. I think it's a new beginning for us…The news songs have really given us something very special," said Leto, who released the first Thirty Seconds to Mars album in 2002.

Leto, who has been in the director's chair for nearly a decade, took on the directing duties again for the short film.

"Telling stories is a big part of what I do, so it was a really natural and comfortable thing. I think because I did all the interviews myself -- I talked to fellow artists and they felt really comfortable. They shared a side of themselves that we don’t share very often," he said. "With 'City of Angels' we have a unique look into people's lives that we all are familiar with but also we see a side that we might not have before."

He's been posting extras from the interviews, all of which will live in a hub. Last month, meanwhile, saw the iTunes release of the band’s documentary,  "Artifact," which follows Thirty Seconds to Mars' legal battles with record label EMI. The film debuted at the Toronto Film Festival in 2012, winning the BlackBerry's People's Choice Documentary Award. It also won the Audience Award at the 2012 Gotham Independent Film Awards and screened at SXSW in 2013.

"'Artifact' is the story of Thirty Seconds to Mars being sued by EMI for $30 million and the fight -- and our fight -- to stay alive. We were battling for our dreams, for our music – for our creative lives, for our career. And we filmed every single second of this incredibly intense battle. It’s the 'David and Goliath' story about art and commerce…It provides a rare insight into how we work and how we do things," said Leto.

Looking ahead to the rest of 2014, Leto says there’s been some new material in the works -- but the focus now is on playing for fans: "Here and there songs come and go, but right now we've been touring incessantly."

Check back later this week for Part 2 of our interview with Jared Leto, in which he talks about the awards buzz surrounding his role in "Dallas Buyers Club."