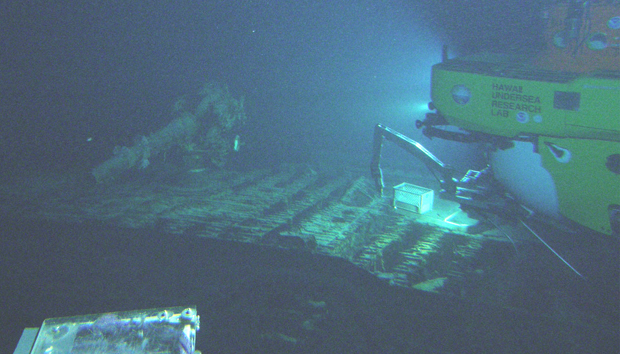 HONOLULU - Scientists plumbing the Pacific Ocean off the Hawaii coast have discovered a World War Two era Japanese submarine, a technological marvel that had been preparing to attack the Panama Canal before being scuttled by U.S. forces.

The 400-foot (122-meter) "Sen-Toku" class vessel — among the largest pre-nuclear submarines ever built - was found in August off the southwest coast of Oahu and had been missing since 1946, scientists at the University of Hawaii at Manoa said.

The I-400 and its sister ship, the I-401, which was found off Oahu in 2005, were able to travel one and a half times around the world without refueling and could hold up to three folding-wing bombers that could be launched minutes after resurfacing, the scientists said.

The accidental discovery of the 1-400, an aircraft-toting I-400 mega sub, on the rock- and debris-littered ocean floor, some 2,300 feet beneath the surface, has solved the mystery surrounding a ship long thought to be further afield.

"We came upon this as we were looking for other targets ... It is like watching a shark at rest," said Jim Delgado, a researcher aboard the Pisces V deep-diving submersible which traveled to the wreckage.

The U.S. Navy captured five Japanese subs, including the I-400, at the end of World War Two and brought them to Pearl Harbor for inspection, the scientists said on Monday.

"It was torpedoed, partially collapsed and had sunk at a steep angle," said Delgado, an archaeologist with the National Oceanic and Atmospheric Administration (NOAA), which helped to fund the dive.

U.S. forces sank the submarines and claimed to have no information on their precise location, in an apparent bid to prevent their technology falling into the hands of the Soviet Union, which had demanded the ships be returned to Japan.

Other mega subs have been found in waters off Oahu and in the Sea of Japan. One in the submarine class remains missing.

The discovery of the I-400 was announced on Monday after NOAA had reviewed its findings with the U.S. State Department and Japanese government officials, researchers said.