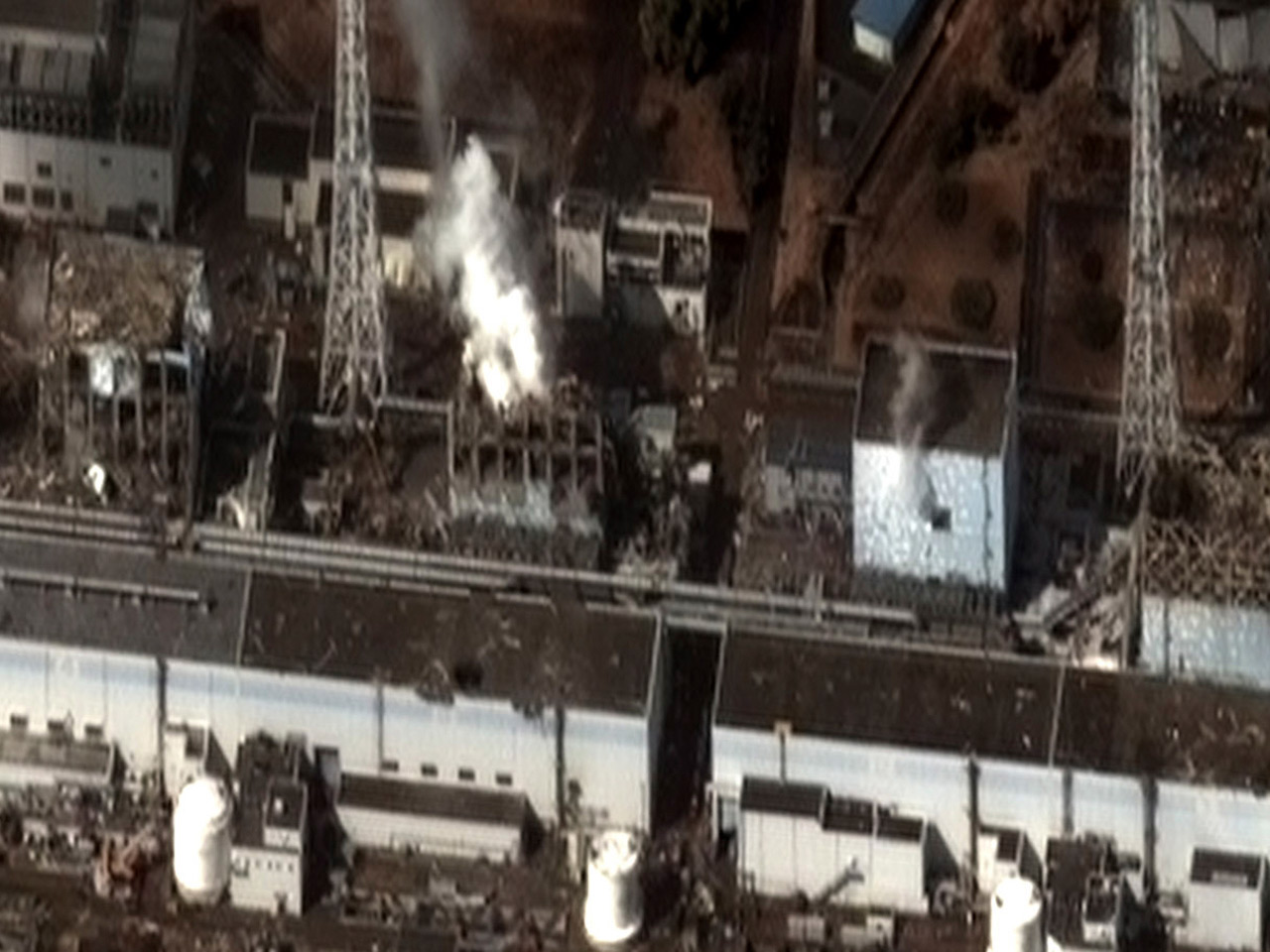 TOKYO - As emergency workers prepared to return to a tsunami-stricken Japanese nuclear power plant after retreating from a spike in radiation, the plant operator said Thursday it has almost completed a new power line that could restore electricity to the complex and solve the crisis that has threatened a meltdown.

Meanwhile, the chief of the U.S. Nuclear Regulatory Commission said Wednesday that the water stopping one reactor's fuel rods from getting hotter and ultimately melting down is gone from one of the plant's spent fuel pools.

Japanese officials denied NRC Chairman Gregory Jaczko's comments that he made before a congressional committee.

If Jaczko is correct, the outer shell of the rods could ignite with enough force to propel the radioactive fuel inside over a wide area.

At the plant, there two key areas of concern, CBS News' Harry Smith reports from Tokyo: pumping enough water into the reactors to keep the nuclear fuel rods cool to avoid a potential meltdown and limiting damage to the all-important containment vessels surrounding the reactor cores.

Jaczko did not say Wednesday how the information was obtained, but the NRC and U.S. Department of Energy both have experts on site at the Fukushima Dai-ichi complex of six reactors. He said the spent fuel pool of the complex's Unit 4 reactor has lost water.

Jaczko said officials believe radiation levels are extremely high, and that could affect workers' ability to stop temperatures from escalating.

"We believe that around the reactor site there are high levels of radiation," Jaczko said told members of Congress. "It would be very difficult for emergency workers to get near the reactors. The doses they could experience would potentially be lethal doses in a very short period of time."

As for the power line to the plant, Tepco spokesman Naoki Tsunoda said early Thursday it is almost complete. Officials plan to try it "as soon as possible" but he could not say when.

The new line would revive electric-powered pumps, allowing the company to maintain a steady water supply to troubled reactors and spent fuel storage ponds, keeping them cool. The 180 emergency workers have been working in shifts to manually pump seawater into the reactors because last week's earthquake and tsunami disabled main and backup power for electric-powered cooling pumps.

Earlier, Energy Secretary Steven Chu told members of a congressional committee that "we don't really know in detail what's happening" because of conflicting information coming from the area.

Soon after Chu's testimony, the U.S. embassy in Tokyo urged all Americans within 50 miles of the power plant to evacuate the area or stay indoors. The Reuters news agency later reported that the British government advised Britons in Tokyo and in areas north of the capital to consider leaving the area.

Tepco officials said at a late night press conference Wednesday that four out of the five vehicles pumping seawater into the plant's reactors are operational. One pump vehicle each has been assigned to reactors No. 1 and No. 3. Reactor No. 2 has two pump vehicles. As of midnight Thursday, a new pump vehicle was being prepared to start working on reactor No. 4.

It was unclear what happened in the nuclear plant's overheating reactors after late morning, when the workers stopped pumping in seawater trying to cool their fuel rods.

Ryohei Shiomi, of Japan's Nuclear and Industrial Safety Agency, told CBS News in a phone interview that the plant was never completely abandoned. He would not say how many workers remained inside the Fukushima Dai-ichi plant after the government suggested an evacuation was taking place.

Speaking to CBS Radio News' Lucy Craft earlier on Wednesday, a representative from Tepco said all the workers were back on the job.

But conditions at the Fukushima Dai-ichi nuclear plant appeared to be worsening. White steam-like clouds drifted up from one reactor which, the government said, likely emitted the burst of radiation that led to the workers' withdrawal. The plant's operator reported a fire at another reactor for the second time in two days.

"They are up against a wall ... this is not just one Three Mile Island. It's effectively four," Sharon Squassoni, an expert on nuclear issues at the Center for Strategic and International Studies, told CBS' "The Early Show."

At one point, national broadcaster NHK showed military helicopters lifting off to survey radiation levels above the complex, preparing to dump water onto the most troubled reactors in a desperate effort to cool them down. The defense ministry later said those flights were a drill, and it had no plans to make an airborne water drop.

Tepco officials said at their late night news conference that they wanted the military to again try pouring water from a helicopter onto the reactors, Reuters reported.

"The anxiety and anger being felt by people in Fukushima have reached a boiling point," the governor of Fukushima prefecture, Yuhei Sato, fumed in an interview with NHK. He criticized preparations for an evacuation if conditions worsen and said centers already housing people moved from nearby the plant do not have enough hot meals and basic necessities.

Fears are so high, voluntary radiation exams are being administered as far as Niigata on the west coast of Japan. And Japanese nuclear authorities have a history of being less than forthcoming about the safety of their reactors, which only contributes to the confusion and distrust, Smith reports.

The nuclear crisis has triggered international alarm and partly overshadowed the human tragedy caused by Friday's 9.0-magnitude earthquake and the subsequent tsunami, a blast of black seawater that pulverized Japan's northeastern coastline. The quake was one of the strongest recorded in history.

Pictures: Faces of the Japan crisis

Millions of people struggled for a fifth day with little food, water or heat, and already chilly temperatures turned to snow in many areas. Police say more than 452,000 people are staying in temporary shelters, often sleeping on the floor in school gymnasiums.

Nearly 3,700 people are officially listed as dead, but officials believe the toll will climb over 10,000 since several thousand more are listed as missing.