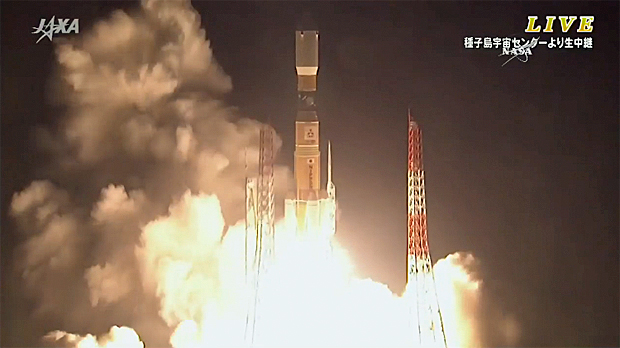 A powerful Japanese H-2B rocket roared to life and climbed away from the rocky coast of southern Japan Wednesday, safely boosting an automated cargo ship into orbit on a flight to deliver much-needed supplies and equipment to the International Space Station in the wake of back-to-back Russian and U.S. launch failures in April and June.

Running three days late because of stormy weather, the 186-foot-tall H-2B lifted off from pad No. 2 at the picturesque Tanegashima Space Center 7:50:49 a.m. EDT (8:50 p.m. local time), roughly the moment Earth's rotation carried the complex into the plane of the station's orbit.

Mounted in a protective nose cone fairing was the Kounotori -- White Stork -- HTV-5 cargo ship, loaded with 4.5 tons of equipment, crew supplies and research gear, including a compact kitchen and components needed to replace some of the hardware lost in a June SpaceX launch failure.

The two-stage H-2B, built by Mitsubishi Heavy Industries, completed the climb to space in a little more than 14 minutes, releasing the supply ship to fly on its own about a minute later.

"HTV-5 launch success! All hands and a robotic arm on deck ready for (cargo)," astronaut Scott Kelly tweeted from the space station.

If all goes well, HTV-5 will reach the lab complex early Monday, pulling up and "parking" about 30 feet away while Japanese astronaut Kimiya Yui, assisted by Kjell Lindgren, locks on with the lab's robot arm around 6:55 a.m. From there, the spacecraft will be pulled in for berthing at the Earth-facing port of the forward Harmony module.

This is the fifth flight of Japan's HTV cargo ship and arguably the most critical to date given the back-to-back failures of a Russian Progress supply ship in April and a SpaceX Dragon launch in June. All together, some 10,500 pounds of equipment and supplies were lost, cutting deeply into the station's reserves.

NASA typically aims to keep six months of supplies aboard the station to protect against launch delays or outright failures, but the two recent resupply mishaps, along with the failure of an Orbital Sciences Cygnus cargo launch late last year, reduced the station's reserves to less than four months.

Those flights, along with a successful HTV cargo delivery, will keep the station supplied well into next year.

But first, the HTV needs to get there.

"We're in good shape right now, but if for some reason HTV didn't get here, we get pretty low on certain consumables probably in late September, early October timeframe," Kelly told CBS News in an interview Monday. "I'm sure we would figure out ways to bridge the gap on those things (but) it is a very important launch for us."

The cargo includes 3,101 pounds of crew supplies, including food, clothing and water, 1,915 pounds of vehicle hardware, 2,753 pounds of research gear, including an experiment rack and an external cosmic ray sensor, 119 pounds of computer hardware and 172 pounds of spacewalk equipment.

Included in those totals is equipment that was added in the wake of the June SpaceX failure, including two filtration beds for the station's water recycling system, a control and pump assembly for urine processing, a respiratory medical pack and spacewalk support equipment.

Also on board: a compact kitchen for the U.S. segment of the station.

"A lot of times the ISS is described as a four-bedroom house, or a five-bedroom house, and that's very true, but the one thing the ISS doesn't have is a kitchen," said flight director Royce Renfrew. "It has the ability for the crew to get water out of a potable water dispenser in the lab (module), there are suitcase-size food warmers that are scattered around, there are a couple of what are called Merlins, which are refrigerators where they can keep their food cold. But it's not all consolidated in one space.

"So we're going to get a kitchen, a galley rack, that's going to go into the (central Unity) module. We'll move the potable water dispenser there, it comes up with its own little refrigerators and it has its own food warmers. So it has water, it has a refrigerator and it has a stove if you want to think of it that way. It'll all be in one place (and) I'm sure the crew will appreciate having that."

Japan plans to build and launch four more HTVs through 2020 to deliver replacement solar array battery packs to the station and NASA is negotiating with the Japanese space agency for additional flights after that. The agency hopes to operate the station through 2024.

"The last four HTV flights will be completely full with batteries, so the research will have to fly on SpaceX while we utilize HTV for that," Mike Suffredini, NASA's space station program manager, told SpaceflightNow. "And then when we get HTV back after that, we'll start to share that duty again with SpaceX."

The HTV-5 launch kicks off a busy few weeks for the space station program. Next Friday, Kelly, cosmonaut Mikhail Kornienko and Gennady Padalka will strap into their Soyuz TMA-16M spacecraft, undock from the upper Poisk module and re-dock at the aft port of the Zvezda command module.

That will set the stage for launch of the the Soyuz TMA-18M spacecraft on Sept. 2 carrying a crew of three to the lab complex: commander Sergey Volkov, European Space Agency astronaut Andreas Mogensen and Kazakh cosmonaut Aidyn Aimbetov.

With their docking at Poisk, the station will be hosting nine crew members for 10 days.

Padalka, Mogensen and Aimbetov will return to Earth Sept. 12 aboard the TMA-16M spacecraft. Volkov will remain on board the station as a long-duration crew member.

"We are really looking forward to this next crew that's coming up, they'll be spending about 10 days up here," Lindgren, making his first space flight, told CBS News. "Of course, Gennady will take that Soyuz home and Sergey will stay up here with us."

He said the station is more than roomy enough for nine crew members.

"Back when the shuttle was flying, we would often have many more than that up here," Lindgren said. "The space station is a large volume and there's plenty of room for this crew of nine. I think it's going to be a lot of fun."

Carbon pollution up to 2 million pounds a second
William Harwood