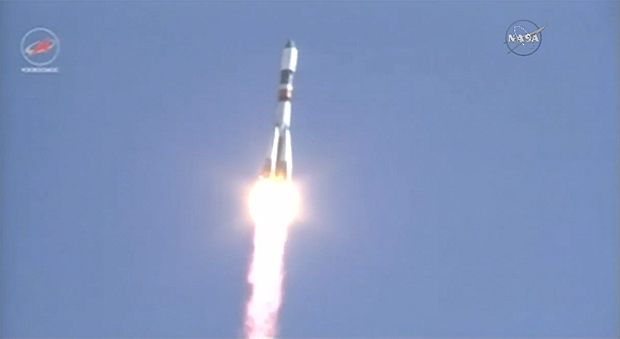 Recovering from an April failure, Russia successfully launched a Progress cargo ship early Friday loaded with more than three tons of supplies and equipment to replenish stockpiles aboard the International Space Station.

The Progress M-28M/60P spacecraft, perched atop a Soyuz-U booster, took off from the Baikonur Cosmodrome in Kazakhstan on time at 12:55 a.m. EDT (10:55 a.m. local time), climbing into a clear blue sky trailing a jet of fiery exhaust from its liquid-fueled strap-on boosters.

That failure came two months to the day after a Progress freighter spun out of control shortly after reaching orbit, the victim of an upper stage malfunction. Loaded with more than three tons of supplies and equipment, the Progress fell back into the atmosphere and burned up on May 8.

The failure triggered extensive analysis and prompted Russian mission managers to delay the return to Earth of three space station crew members and to put off launch of their replacements.

But engineers eventually identified a problem with the Soyuz-U upper stage, implemented upgrades and moved up a launch originally planned for August to Friday. And it appeared to go off without a hitch as the booster arced away to the east directly into the plane of the space station's orbit.

Eight minutes and 50 seconds later, the Progress cargo ship was released from the Soyuz upper stage, its solar panels and antennas deployed as expected and the spacecraft set off after the International Space Station.

The "retro-future" of "The Jetsons"

"The reports from the Russian mission control center have been perfect, all of the systems on the Progress in excellent shape," said Rob Navias, NASA's mission control commentator in Houston.

If all goes well, the freighter will catch up with its quarry early Sunday, gliding in for a docking at the Russian Pirs module around 3:13 a.m., bringing 1,940 pounds of propellant to the lab, 106 pounds of oxygen, 926 pounds of water and 3,133 pounds of crew supplies and research equipment.

The back-to-back losses of the two previous supply ships, and the failure of an Orbital Sciences Antares rocket last October that destroyed a Cygnus cargo capsule, cut into the space station's reserves, reducing stockpiles from about six months to four or less.

Space station managers said the lab had enough supplies on board to support the station's crew through October even if no other supply ships showed up. But with the Progress safely on its way, and assuming a Japanese HTV cargo ship gets off as planned in August, the station will be adequately provisioned through the end of the year.

"If we had any further delays in our resupplies, particularly past mid September, October, then we'd have some issues," station astronaut Scott Kelly said Thursday. "But with our current transportation plan, with Progress and HTV in August, assuming those come on time, we should be in great shape."

But losing three out of the past seven cargo missions did more than just cut into crew supplies. Critical research gear was lost, along with spare parts and other needed equipment. Kelly said he was particularly mindful of students who lost experiments in the two U.S. resupply failures.

"Third time's the charm, I hope," he said. "We're as confident as we can be in any rocket launch. There's always risk, there's always chances of failure, but you have to look at the positive, and we expect (the Progress is) going to arrive on time."