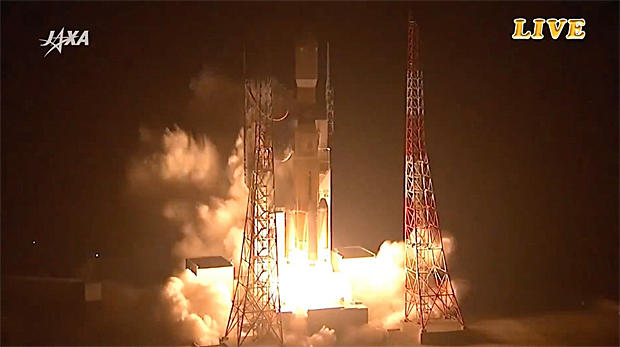 A powerful rocket carrying a Japanese HTV cargo ship streaked into orbit Friday, kicking off a four-day trip to the International Space Station to deliver 4.3 tons of supplies and equipment, including a set of powerful new batteries for the lab’s solar power system.

Climbing directly into the plane of the space station’s orbit, the rocket smoothly accelerated, leaving the rocky coast of Tanegashima Island behind as it shot away on a southeasterly trajectory.

Fourteen minutes later, the H-IIB’s LE-5B second stage shut down and a minute after that, the HTV “Kounotori” cargo ship was released to fly on its own.

If all goes well, the spacecraft will catch up with the International Space Station early Tuesday, pulling up to within about 30 feet and then standing by while Expedition 50 commander Shane Kimbrough and French astronaut Thomas Pesquet, operating the lab’s robot arm, lock onto a grapple fixture.

From there, the HTV will be pulled in for berthing at the Earth-facing port of the forward Harmony module.

Mounted on a pallet in the supply ship’s unpressurized cargo bay are six 550-pound lithium-ion batteries that will replace 12 aging nickel-hydrogen power packs in one of the station’s four sets of solar arrays. Three more HTV flights will be needed to ferry up the remaining three sets of batteries needed by the station’s other arrays.

The HTV’s arrival will be a relief to NASA, coming less than two weeks after a Russian Progress supply ship carrying 2.5 tons of equipment and supplies was destroyed during launch Dec. 1 after a malfunction of some sort in the Soyuz booster’s upper stage.

That failure came three months after a SpaceX Falcon 9 rocket exploded on the launch pad at Cape Canaveral during a pre-launch test on Sept. 1. The Falcon 9, which is used to launch SpaceX Dragon space station supply ships, is not expected to resume flights until January, and it’s not yet clear when the next Dragon might be launched.

NASA managers say the station currently is well stocked with critical supplies and that the Progress failure will have minimal impact on lab operations. But the HTV’s arrival will be a welcome milestone, especially the delivery of the new batteries.

The station gets most of its power from four huge sets of rotating solar arrays, two on each end of a long truss. Each set of arrays relies on 12 nickel hydrogen batteries to provide electricity when the station is in Earth’s shadow and out of direct sunlight.

The pallet carrying the six new batteries will be pulled out of the HTV’s unpressurized cargo bay by the station’s robot and moved to the right side of the power truss. The batteries will be robotically installed at the base of the inboard starboard 4, or S4, set of arrays, which feed power channels 1A and 3A.

Nine of the older batteries will be attached to the cargo pallet as the replacements are installed. The pallet eventually will be moved back into the HTV, which will burn up in the atmosphere when the cargo ship re-enters around Jan. 20.

The remaining three retired batteries will be attached to “adapter plates” beside the new batteries where they will remain in long-term storage. Two spacewalks will be required in January to install the adapter plates and complete the battery replacement work.