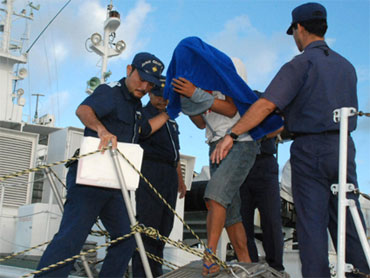 Japan released the captain of a Chinese fishing vessel involved in a collision near disputed islands, a local police official said Friday.

The Chinese man was arrested by Japanese authorities earlier this month after his trawler collided with two Japanese patrol boats near islands in the East China Sea claimed by both countries.

The incident had raised tensions with China, which has angrily demanded Tokyo release the captain, and cut off ministerial-level talks with Japan.

Japanese prosecutors announced they planned to release the captain hours after China said it was investigating four Japanese nationals suspected of illegally filming military targets and entering a military zone without authorization.

China's state-run Xinhua News Agency cited state security authorities in the northern city of Shijiazhuang as saying they had "taken measures" against the four Japanese "after receiving a report about their illegal activities." There was no elaboration.

The brief report late Thursday night did not say whether the four Japanese were in detention.

At a press briefing, Fujita spokesman Tatsuro Tsuchiya said the company has not been able to contact the men since receiving a one-word text message from one of them Tuesday morning that read "Help."

"We hope that they will be released quickly," Tsuchiya told reporters.

Kyodo news agency reported the men were preparing a bid on a project to dispose of abandoned chemical weapons from World War II but Fujita would not confirm that.

Japan's Foreign Ministry confirmed it had received word from the Chinese government Thursday night about the incident. It did not have further details, including whether the men had been arrested or merely questioned.